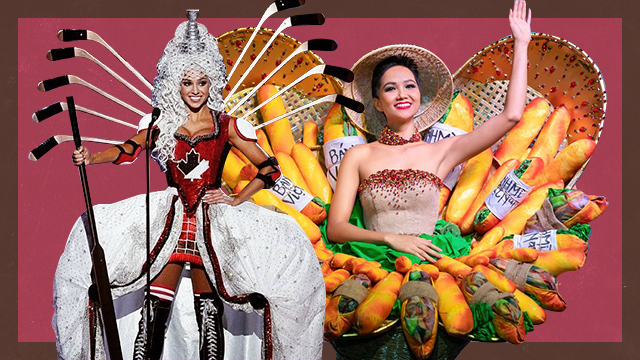 Oh no, these aren't just memes.

(SPOT.ph) Look, we know the Miss Universe competition in itself is huge but we can't lie: The National Costumes segment is the most awaited part. This is usually the segment that gets the most buzz as women from all around the world represent their countries by working the stage in the most elaborate ensembles. And when we say elaborate, we mean everything from elegant and understated to our-eyebrows-went-through-the-roof type of outfit. Don't believe us? Well we round up some of the wildest creations we've seen on the Miss Universe preliminaries stage from the past decade.

Would you work the stage in these 10 unexpected national costumes worn by Miss Universe candidates?

Whoa. We know we all miss travelling but Shauntae Miller took it to the next level with this intricate stage prop. She worked the stage with an airplane to represent the Bahamasair airline for the 69th Miss Universe run (supposed to have happened in 2020).

Shweta Sekhon showcased the pride and love Malaysia has for their cuisine by having a literal table laid out with food as part of her gown's skirts—we doubt it's real fare though, otherwise we would have seen other candidates try and steal a bite. We know we would have!

Miss Laos took home the title of best national costume in 2018 with this triple act. On-anong Homsombath brought this elaborate costume on stage, as inspired by the Kinnaree, half-bird, half-woman creatures from her country's mythology.

And on the opposite side of the spectrum during the 2018 run was this dress. It was based on the historic summit between then U.S. president Donald Trump and North Korean leader Kim Jong-Un which was held in June 2018 in Singapore. Anyone else feel like this kind of looks like those "World Peace" posters we used to make as kids?

Puerto Rico's Kiara Ortega worked the stage in another outfit designed to symbolize the greater good. With three pairs of hands extending from her back, she was a walking manifestation of how her country rose again from the onslaught of Hurricane Maria in 2017.

Vietnam's candidates sure know how to steal the show. In 2021, their candidate "hatched" on stage in an elaborate white outfit that resembled an egg; in 2019, their candidate wore a huge version of their instantly recognizable coffee filter as a headpiece—but before all that, H'Hen Nie slayed the stage in a banh mi dress.

As far as National Costumes go, this one worn by Johanna Acs is pretty understated—only that castle on her head sure is hard to ignore. The tulle-like dress with literal lights in them, plus that book and castle, are meant to represent all the fairy tales that came from German literature.

We're sure you've seen this picture going around the Internet. Yes, it really is a national costume worn by Canada rep Chanel Beckenlehner in 2015—because Canada really loves their hockey. Their candidate also wore what is essentially a giant weed dress in support of using cannabis medically in 2019 but nothing can upstage this hockey masterpiece.

There's something about this retro look and candidate Aniporn Chalermburanawong's epic game attitude that just works. This 2015 outfit celebrating the Thai tuktuk, their version of a tricycle, is an old fave among many pageant fans and we can totally see how this outlandish concept works.

"Nothing screams national costume like the first Miss USA transformer," wrote 2013 Miss Universe U.S. candidate Erin Brady on her IG along with pics of the erm, interesting national costume she wore for the pageant. And hey, as long as she enjoyed it and that's how she wants to rep her country, we see no issue here.

Adventurer Savvy Miss Universe Staying In Heading Out National Costume
Your Guide to Thriving in This Strange New World
Staying
In? What to watch, what to eat, and where to shop from home
OR
Heading
Out? What you need to know to stay safe when heading out