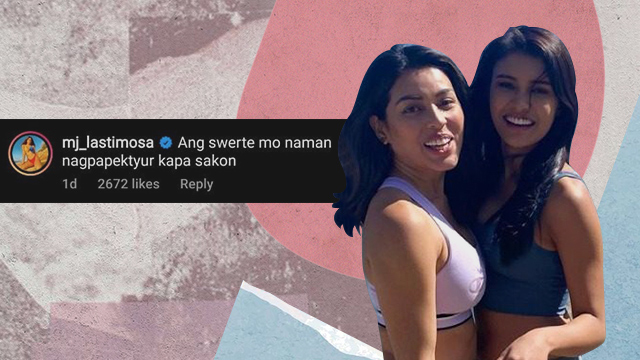 (SPOT.ph) Beauty queens Rabiya Mateo and MJ Lastimosa are the newest BFFs to take over social media. The two are currently in the U.S. following the 69th Miss Universe pageant held in May 2021—and their online antics are leaving everyone in stitches. We know you've seen how Lastimosa, Miss Universe 2014 Top 10 finalist, recruited her fellow beauty queens to be her IG photographers (including the current national director of the Miss Universe Philippines Organization, Shamcey Supsup), but now it looks likes she's given Mateo the chance to run her Twitter account for a bit—or at least that's how it seems!

Twitter was abuzz early morning on June 8, Philippine time, when Lastimosa's account started tweeting with "- Ibyang" signed on to them (Mateo's nickname). The first Tweet was all praises for Lastimosa, stating that the 2014 titleholder should definitely vie for the Miss Universe crown again.

Meanwhile, it looks like the Ibyang "taking over" Lastimosa's account wasn't all sweetness. Lastimosa was #Shookt when she saw that Mateo apparently came for a Twitter account using her name. TBH, we're all for this feisty side of Mateo! There was also a cheeky "Pag [pasensiyahan niyo] na si Ibyang. Angkati ng kamay nito, ah," which must have been from Lastimosa.

Lastimosa also tweeted in her penchant kooky manner acknowledging the irony of a #IbyangTwitterParty when the 2020 Miss Universe Philippines doesn't even have an official Twitter account. Plus, she even quote-tweeted the earlier Miss Universe tweet! Time to manifest.

Over on Instagram, Lastimosa's comments on Mateo's pictures have been stirring up reactions, too. Mateo posted adorable shots of the two having fun with the Golden Gate Bridge in the background with a sweet "sisterhood" caption—to which Lastimosa replied with a "Ang swerte mo naman nakapag-picture ka pa sa akin."

Lastimosa even went for a little dig when Mateo posted a travel picture. The former commented with a cheeky "Luh luh luh tawa now, iyak later." On what must be an unrelated note, the post was made a few days after Neil Salvacion, Mateo's longtime boyfriend, confirmed their breakup on his Instagram account.

And ever the funny one, Lastimosa also commented on a gorgeous purple OOTD pic of Mateo's, saying she looked like an eggplant—to which Mateo replied with a "comment mo talaga inaabangan ko." Same, Ibyang, same.

Adventurer Savvy Rabiya Mateo Mj Lastimosa Miss Universe Humor Staying In Heading Out Viral
Your Guide to Thriving in This Strange New World
Staying
In? What to watch, what to eat, and where to shop from home
OR
Heading
Out? What you need to know to stay safe when heading out