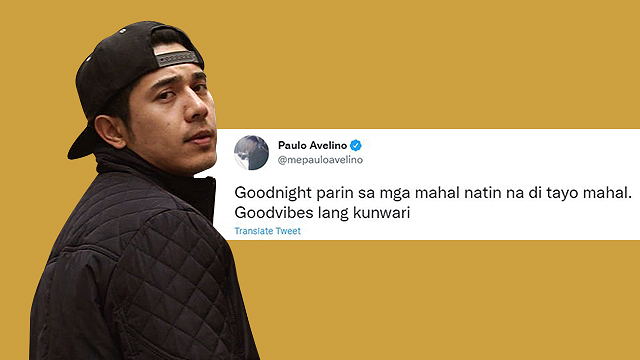 Honestly, this is the only "sad boi" content we'd approve of.

(SPOT.ph) Actor Paulo Avelino isn't exactly the shy, introverted type—as evidenced by all the times his tweets had parts of the local Twitterverse #shookt. Typically, his feed is full of updates on his latest projects and happenings (such as I'm Drunk, I Love You landing on Netflix) but once in a while, he likes to show us the meaning of kalat online. But it looks like the past few weeks have him in quite a mood.

Also read: Alessandra de Rossi Doing Laundry While All Dressed Up Has Us Living

Avelino's tweets even shifted from fun chaotic energy to straight-up hugot recently. We don't know if it's ECQ season who-knows-anymore combined with all these damn headlines getting to him, but the general mood for everyone has not been great. And it seems to be manifesting in Avelino's tweets.

Avelino dropped this short-yet-hard-hitting think-piece on Twitter late night on August 18. Could he be aiming this at anyone in particular or just playing out a role in his head? Whatever it is, it definitely struck a chord with people.

Cries of feeling attacked soon came, especially since he followed that late-night tweet with the one above. Meanwhile, there were more flirty ones who managed to use the tweet as an opportunity to shout out their love for the actor.

And this isn't even the first time he's had Twitter going crazy. The tweet that started it all came out on August 9, a few days after our return to ECQ.

Yup, he really did that and more. Avelino ended up on Zoom with a lot of fans—while he drank a beer or two. Since then, he's been tweeting some quality #hugot stuff in between his projects and other interests. Whatever brought on this sudden shift in Twitter persona, we hope he's doing good! We'll just leave you with this tweet that hit us right in the feels.

Adventurer Savvy Paulo Avelino Humor Twitter Staying In
Your Guide to Thriving in This Strange New World
Staying
In? What to watch, what to eat, and where to shop from home
OR
Heading
Out? What you need to know to stay safe when heading out