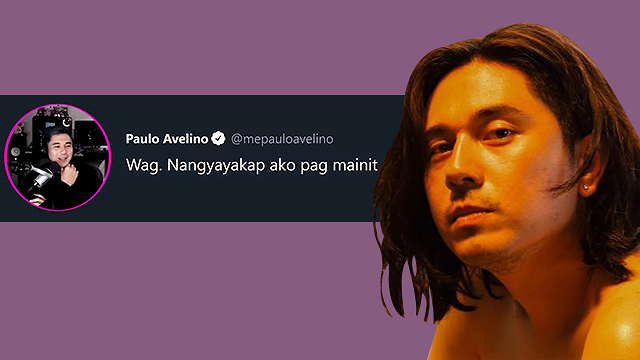 WATCH: Paulo Avelino Reading His Kalat Tweets Is the Gift We Didn't Know We Wanted

The man has no shame and we're not mad at it.

(SPOT.ph) So Paulo Avelino has been making waves online for his portrayal of Paulo Avelino in Fan Girl. Yup, the heartthrob went the meta way for Antoinette Jadaone's film about obsessed fan girl Jane (Charlie Dizon) meeting her idol, Paulo Avelino! And to add to the layers, Black Sheep Studios dropped a hilarious clip of Avelino reading out his old, 100% kalat replies to thirst tweets on December 22—and we can't get enough.

If only we had a quarter of this star's self-assuredness! Avelino has always had a reputation for being, erm, outspoken on Twitter and we're sure you remember all the times the platform went crazy when he was in one of his responsive moods. The real Avelino probably isn't like the Fan Girl version—we hope, actually, since fictional Avelino had us feeling very conflicted—but the kalat tweets are definitely in character. Don't ask us about the "tapakan mo ako" thing either, we're as confused as he is on this one.

Avelino also brought out his Twitter powers for Goyo: Ang Batang Heneral, the much-awaited sequel to Heneral Luna where he played General Gregorio "Goyo" del Pilar himself, back in 2018. Could he have been hinting at Fan Girl in that last tweet—and does this mean he is now ready to become a full-time househusband?

Fan Girl has been on everybody's radar since director Jadaone put out a call for a newbie to play the titular character, a role that landed in the hands of today's "It" girl Dizon. Also, have we mentioned Avelino played himself in this 2020 Metro Manila Film Festival entry, which, BTW, bagged the Best Picture award, among many others. If that's still not enough reason to put it on your watch list, well, Avelino and his kalat tweets are here, too.

Adventurer Savvy Paulo Avelino Antoinette Jadaone Charlie Dizon Black Sheep Twitter Staying In
Your Guide to Thriving in This Strange New World
Staying
In? What to watch, what to eat, and where to shop from home
OR
Heading
Out? What you need to know to stay safe when heading out