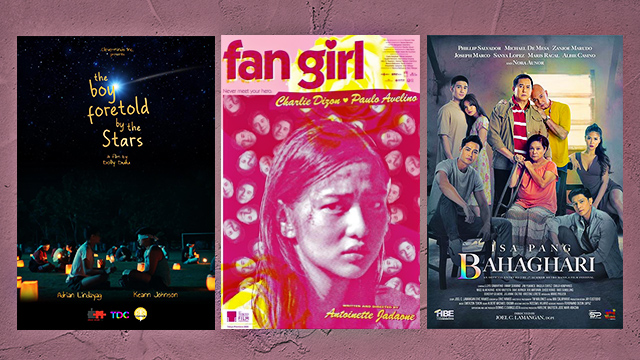 Find out how and where to stream the movies!

(SPOT.ph) The 2020 Metro Manila Film Festival is officially pushing through. Unlike its previous editions, the film fest will go digital in 2020 and will be available to watch online through UpStream starting December 25. Aside from being able to watch the films from home, the digital space has allowed for the usual "Magic 8" picks to grow to a cool 10!

Yup, not a Vice Ganda movie in sight—make of that what you will. In case you can't decide which film to mark your calendars for, we list down the most exciting Metro Manila Film Festival (MMFF) entries and why they deserve a spot on your list.

Prep the popcorn for the most exciting films streaming for the 2020 MMFF:

Nora Aunor makes a comeback to the film festival through Joel Lamangan's latest film—who also happens to have directed the 2018 LGBTQ+ hit, Rainbow's Sunset. The film follows a 65-year old seaman who reappears years after having been supposedly lost to the ocean. His family, including his wife (Aunor), have moved on with their lives at this point and the seaman recruits his gay best friend to help him re-woo the loves of his life.

Why you should watch it: The spirited Maris Racal will be portraying the younger version of Aunor's character—this we need to see!

The Boy Foretold by the Stars

Two students from an all-boys Catholic school—one decidedly queer and out about it, and the other fresh from a three-year relationship with a girl—find themselves at a crossroads. One is sure the other is the soulmate prophesied by a fortune teller, and the other isn't even sure who he is anymore.

Why you should watch it: Fate and faith are at the core of the first ever Boys Love entry to this film fest.

Local animated films don't get enough credit so be sure to check this out! Magikland is 95% animation with a bit of live-action mixed in. Fun fact: The movie was inspired by the first ever Pinoy themed adventure park of the same name in Silay, Negros Occidental and revolves around a mobile game that transports the players to its virtual world.

Why you should watch it: The late Peque Gallaga helmed this film as one of its producers. The acclaimed director passed away May 2020 so don't miss the chance to watch one of his last works.

Antoinette Jadaone serves up some genre-bending thrills with the much-talked about Fan Girl! Newcomer Charlie Dizon stars as Jane, a highschooler obsessed with superstar and heartthrob Paulo Avelino—who yes, plays himself in the film—and basically follows him home. Once they're alone though, Jane realizes she may have just bit off a lot more than she can chew.

Why you should watch it: Is it a rom-com? Is it a thriller? Is it a drama? Jadaone has everyone guessing with her latest film and we can't wait to see how Jane finds out why people say "never meet your heroes."

Adventurer Savvy Mmff Metro Manila Film Festival Staying In Streaming Magikland Nora Aunor Joel Lamangan Lgbt The Boy Foretold By The Stars Fan Girl Paulo Avelino Antoinette Jadaone
Your Guide to Thriving in This Strange New World
Staying
In? What to watch, what to eat, and where to shop from home
OR
Heading
Out? What you need to know to stay safe when heading out