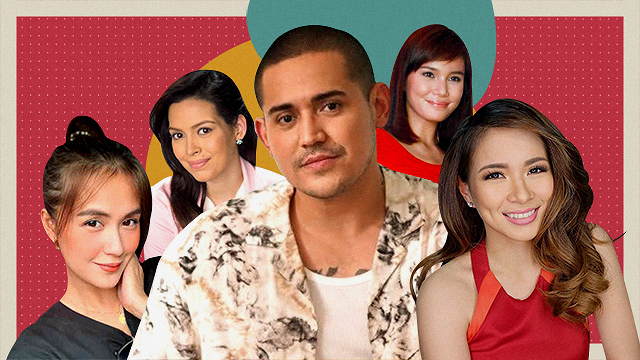 We keep you up to speed.

(SPOT.ph) Paolo Contis is the talk of the town as of late (so is Baguio, and even the phrase "as a friend," but that's another story). The buzz surrounding the actor comes after his Instagram post on September 8 that finally addresses his split with his partner of six years, LJ Reyes. There's a lot to unpack in his two-part message but the gist is basically "I'm wrong. I'm sorry." and a clarification that his A Faraway Land co-star Yen Santos had nothing to do with the split (which is where their Baguio trip as friends comes in).

The recent revelations have pretty much all of social media #shookt. If you're a little lost in all of this, we totally get it. With all the buzz surrounding Contis, we round up his romantic links in the past.

Here's a look at the past relationships of Paolo Contis:

Speculation that the two had split began on August 19 when Contis unfollowed everyone on Instagram, including Reyes. All pictures of Reyes also vanished from his feed. On August 23, Contis' co-manager Lolit Solis confirmed the break-up, stating that there was no third party involved. On September 1, an interview with Boy Abunda was released where Reyes said that the split was not a "mutual" decision. Reyes is currently in New York City with her family and her two children. Contis and Reyes have a two-year-old daughter together.

Contis also apologized to his estranged wife Lian Paz in his recent IG post after folks online made comparisons to their own relationship. Contis and Paz, a former EB Babe dancer on Eat Bulaga, were married in 2009. In 2012, she opened up about their split on the now-defunct GMA talk show Startalk. "Sabi niya, 'I’m not doing this because I don’t love you anymore, I’m doing this for you,’" said Paz of how they broke up. Paz is currently based in Cebu with her and Contis' two daughters.

It turns out Isabel Oli and Paolo Contis were serious enough to have reached the engagement stage. Contis gave Oli a ring on her birthday in 2008 and while they did not confirm it back then, it was an engagement ring. But three weeks later, she returned the ring when she realized their relationship was not working out. Oli is now married to actor John Prats.

You might remember Italian-Filipina Castiglione when she was paired up with Dingdong Dantes on GMA and appeared in the Encantadia series. In 2010, she told PEP.ph that she was happy for Contis and his then-relationship with Paz. By then, Castiglione was already a mother to twin boys, too. She regularly updates her IG with pics of her and her family with husband Richie Bautista in Canada.

What Everyone Is Reading

Adventurer Savvy Paolo Contis Dating History Staying In Team-00295
Your Guide to Thriving in This Strange New World
Staying
In? What to watch, what to eat, and where to shop from home
OR
Heading
Out? What you need to know to stay safe when heading out