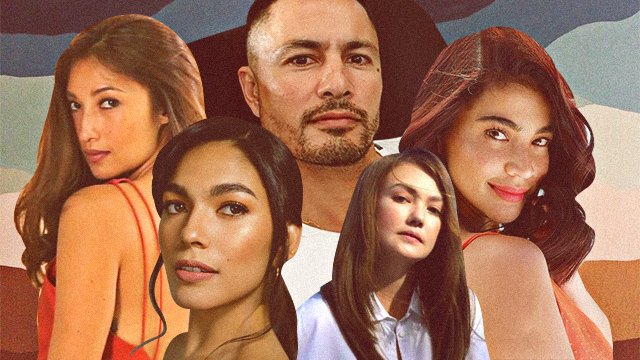 The Bachelor: The Women Who've Been Linked to Derek Ramsay

We take a look at which ladies have stolen his heart before.

(SPOT.ph) Derek Ramsay's romantic entanglements are back in the headlines—this time thanks to his months-old relationship with fellow celebrity Ellen Adarna. The 44-year-old actor and 32-year-old actress confirmed their relationship on February 27 to Pep.ph complete with a cuddly and candid interview. And with an IG post by Adarna on March 30 showing what looks to be a proposal, it seems they're engaged—as in, to be married. Now everyone's abuzz wondering if one of local showbiz's most popular leading men will finally tie the knot!

A Brief Look Into the Dating History of Derek Ramsay

Adarna and Ramsay reportedly hit it off at a dinner party at Ramsay's house attended by neighbors—which included Adarna, Ruffa Gutierrez, John Estrada, and others in what must be a very star-studded neighborhood—in Ayala Alabang, Muntinlupa, on January 11. Guiterrez started the ball rolling by posting pics on social media of the two bonding really well. For the next few weeks, Ramsay and Adarna would pop up on each other's feeds and soon at the end of February, they confirmed that they'd been in a relationship for about a month.

The two played a married couple on GMA's series The Better Woman (2019) and officially confirmed their relationship towards the final episodes. They talked about how close they were to each other's parents in September of 2019 and even started a series of Andrek Vlogs on YouTube during the quarantine. Rumors of their split began circulating towards the end of 2020 with Torres confirming the breakup in November. Ramsay would later say that they just weren't right for each other and that she deserved better on his Intagram.

Whispers about Ramsay and his non-showbiz girlfriend Joanne Villablanca began mid-2015. The two were constants on each others IG feeds throughout the years as well, confirming that they were living together in 2017 along with Villablanca's daughter from a previous relationship. Villablanca was present when Ramsay signed on to GMA in April 2019—where they were hit with a barrage of marriage questions—so their breakup confirmation in June the same year was a bit of a surprise.

Reyes and Ramsay had a brief but very well-documented relationship in 2013. The two popular stars became close on the set of No Other Woman (2011) and remained friends, with Ramsay saying that he thought of Reyes as "one of my boys, one of my buddies"—which is probably why when they confirmed that they were dating in August 2013, both were unable to say it outright. The two were equally mum about their breakup when the news broke less than a month later.

Ramsay was linked to fellow frisbee player Alexa Amos in late 2012. Amos was tagged by media as Ramsay's "non-showbiz girl" as the two were very private about their couple status, which they kept very low-key as they had both just come out of long-term relationships, the actor told Pep.ph when they asked about this "special someone" in October 2013. They never confirmed their relationship nor their breakup, so we'll leave it at that.

Ramsay and Panganiban's long-term relationship was consistently in the headlines throughout their six years together—especially as it was during this time that news of Ramsay and his estranged wife, Mary Christine Jolly, came to light (more on her later). The two began living together a year or so into their relationship but things went south by the fourth year—all the unresolved conflicts eventually came to a head and the two broke up, over a phone call, in 2012.

Panganiban moved out of their shared home soon after. In 2013, she revealed the many reasons their relationship didn't work out. By then, she was dating John Lloyd Cruz while Ramsay was in the midst of rumors linking him to Christine Reyes.

Anne Curtis and Ramsay were linked way before the two starred in the steamy flicks No Other Woman (2011) and A Secret Affair (2012). It seems the relationship didn't get too serious as Curtis explained, "Hindi din, hindi naging kami. When I was very, very young, nanligaw siya, a long, long time ago, that was forever ago. MTV VJ pa lang si Derek," she was quoted by Push ABS-CBN. Curtis explained that she had just broken things off with then boyfriend Oyo Sotto so Ramsay wasn't happening for her right then. Still, it looks like the two have a great working relationship, as evidenced by the two blockbuster movies.

Solenn Heussaff and Ramsay were together for around four years before they eventually parted ways in 2006. "Derek was my first real boyfriend. He was my first love, so our relationship was kind of intense," Heusaff told Inquirer in 2016. It is clear the two still have a special place in their hearts for each other, with Ramsay explaining that he had to break his own heart and let go of Heussaff, for both their sakes, we suppose.

Arguably one of Ramsay's most tumultous relationships is the one he has with Mary Christine Jolly. News of his marriage to Jolly, a Filipino-Indian model, came out in 2011 along with their son Austin, though it was only in 2014 that Ramsay confirmed that he was the father. The two were purportedly married in a civil ceremony in 2002 and lived together for a few months before going separate ways. It was only in 2020, after a long legal battle, that Ramsay confirmed in an Instagram comment that the marriage has been declared null and void.

UPDATED (March 30):  This article was updated following Adarna's Instagram post of what looks to be a proposal.

Adventurer Savvy Derek Ramsay Showbiz Anne Curtis Solenn Heusaff Ellen Adarna Andrea Torres Angelica Panganiban Staying In Greener
Your Guide to Thriving in This Strange New World
Staying
In? What to watch, what to eat, and where to shop from home
OR
Heading
Out? What you need to know to stay safe when heading out