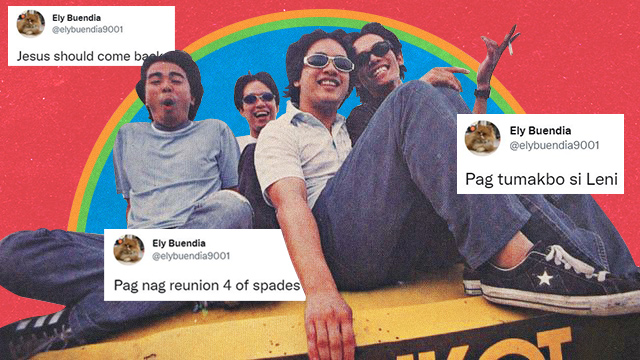 And IV of Spades, and Jesus too.

(SPOT.ph) Former Eraserheads frontman Ely Buendia took to Twitter for a live Q&A today, September 28, to promote his upcoming virtual concert called Superproxies. "For one hour, ask me anything you want.  #SUPERPROXIES," Buendia posted on September 27. Questions ranged from his favorite films and songs to music-related advice, but of course, fans just had to ask whether there's still hope for another Eraserheads reunion.

"Pag tumakbo si Leni," was his answer. Vice President Leni Robredo has not yet declared any clear intention to run during the 2022 national elections, and it looks like Buendia's reply struck a chord with the Twitterverse.

Ely Buendia on the Possibility of anEraserheads Reunion

The tweet got more than 14,000 likes, 1,100 quote tweets, and around 2,800 retweets as of writing. Between all the people who just want an Eraserheads reunion and people who want Robredo to run in the next elections—and folks who want both—the tweet was flooded with reactions.

Jesus should come back. https://t.co/Oy8ZIkr0qO

But Buendia also had a few different answers to similar questions; he even answered the same question twice! For the second Eraserheads reunion question, Buendia said, "Pag nag reunion 4 of spades," he wrote as is, talking about the popular rock band IV of Spades whose lead vocalist Unique Salonga broke away from the group in 2018. He also said, "Jesus should come back," in another tweet referencing well, you already know.

In a later tweet, he posted a disclaimer, saying that his political views are his own and does not represent the views of the rest of the other former Eraserheads members.

In March, he dropped "Metro", a track where he asked "Pangulo ba o panggulo?"—which, while it asked necessary questions, folks online were quick to make a connection to a possible political campaign. "Metro" was made for a group called We Need A Leader 2022, which is also a tagline from former house speaker Pantaleon Alvarez.

Meanwhile, Robredo has yet to declare her candidacy. On September 19, she said that she is ready to vie for the presidency in the 2022 elections should she be picked as the opposition's common candidate. "Dapat pagtulung-tulungan natin. Kapag hinayaan nating maulit ulit, hindi tayo natuto sa kasaysayan," she said.

Filing of candidacy is scheduled from October 1 to 8 which means there's still time. Who knows, perhaps by next month we'll get wind of a reunion in the works! Don't worry, we have the receipts.

Adventurer Savvy Leni Robredo Ely Buendia Eraserheads Humor Staying In
Your Guide to Thriving in This Strange New World
Staying
In? What to watch, what to eat, and where to shop from home
OR
Heading
Out? What you need to know to stay safe when heading out