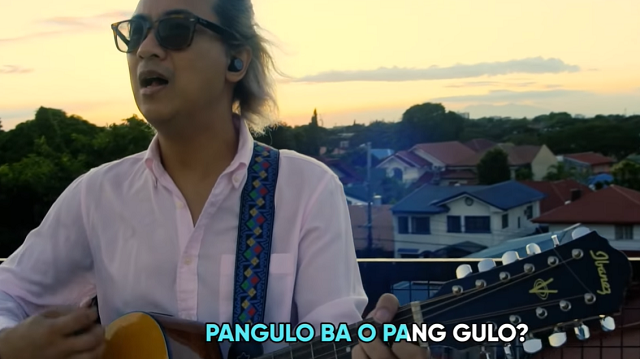 A total of six times.

(SPOT.ph) E-heads front man Ely Buendia dropped a new song on Monday, March 15—and the lyrics are asking some very necessary questions. Entitled "Metro," the track is a throwback to Buendia's days with one of the biggest OPM bands ever. Think a steady guitar and drums rhythm with Buendia's distinct voice singing a story you just have to listen to. Prep your vocals and check out the simple music video that dropped with the track!

Raise your hands if you're loving that they also put in the lyrics, karaoke-style. Anyone else scream that last question by the end? Buendia's new track was composed for We Need A Leader 2022, a group that calls themselves an educational blog that popped up right as the country gears up for the national elections next year. Fittingly, "Metro" and all its questions was released right on the day Metro Manila marked an entire year of quarantine.

A look through the YouTube channel of We Need A Leader 2022 shows a couple more songs by other popular artists who have also been voices of a generation or movement. Folks like Freddie Aguilar, Lolita Carbon with ASIN, and even Aegis also have their own anthems asking people to really, really think about who they want as a leader next. No names or personalities have officially been said to be behind the group.

"Metro" dropped a few weeks after Buendia dropped a bomb on one of Eraserheads' lasting myths: "Spoliarium" has nothing to with the life and tragic death of '80s star Pepsi Paloma. Buendia separated the famous track from the controversial alleged rape of the young actress by "Enteng and Joey"—names dropped in the lyrics—and another comedian, saying that the two names refer to roadies who were touring with them at the time.

Still, it looks like Buendia's latest song is proof he isn't afraid to make some hard-hitting points. Just saying. In case you wanted to see the lyrics in full, read it below.

The Lyrics to "Metro" by Ely Buendia

Adventurer Savvy Seasoned Ely Buendia Eraserheads Nostalgia Staying In Heading Out
Your Guide to Thriving in This Strange New World
Staying
In? What to watch, what to eat, and where to shop from home
OR
Heading
Out? What you need to know to stay safe when heading out