Probably the biggest fans of Bb. Pilipinas Maria Venus Raj, this group of friends literally jumped for joy when the Philippine bet was named as part of the 15 semi-finalists in the recent Miss Universe 2010 pageant held at Las Vegas, USA (See their priceless reactions at 2:17).

Screaming their heads off in joy and defying gravity by jumping up and down on the bed, the self-filmed video was shot while fashion designers Veejay Floresca (of Project Runway Philippines fame) and Bautista (who dresses Kris Aquino and Charlene Gonzales, among other stars) watched the Miss Universe Pageant on TV with their friends Lex Librea and Aleq Africa.

According to the two designers, Librea (in the tank top) is known as a walking beauty pageant encyclopedia, is a big fan of Venezuelan candidates and knows everything about the national pageants in Venezuela. Aleq (far right) is their runway and ramp expert. The four friends make a date of watching the Miss Universe pageant annually at Librea’s place.

Posted on Youtube to share with friends, the video that they took went viral in a few hours, something they did not expect. "It was supposed to be a personal video," said Floresca. "We wanted to see our own reactions should Venus’s name be called. We watched the video after the pageant and we were laughing so much when we saw it! We didn’t expect so many people would like it." 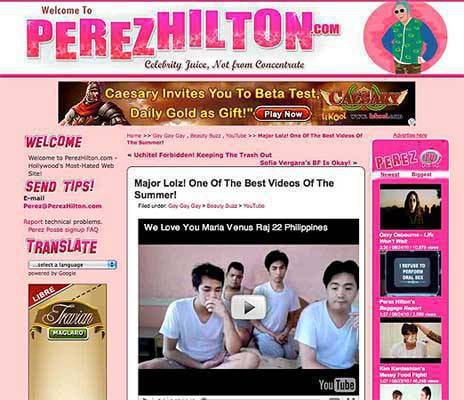 The video also made it to the famous entertainment and gossip website PerezHilton.com. PerezHilton says, "This video is going to make you want to buy a white t-shirt, crawl into your bed to pray and lose your shit over Miss Philippines!"

As for their Post-Game Report, both Floresca and Bautista had only nice things to say about Raj. Both designers say they liked Raj’s evening gown. Floresca liked that it was "simple and flowy. She carried it well!" Bautista said, "I expected worse (something recycled), but to my surprise her gown was new and it was actually nice. I love the fluidity and the color worked well for her skin color. I was just not a big fan of the bow on the bust area."

Venus Raj Missuniverse2010.veejayfloresca Martinbautista
Your Guide to Thriving in This Strange New World
Staying
In? What to watch, what to eat, and where to shop from home
OR
Heading
Out? What you need to know to stay safe when heading out