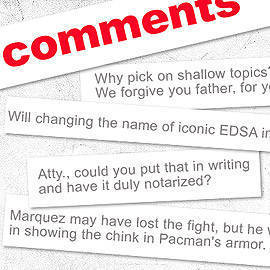 Did your comment make it to our favorites this year? 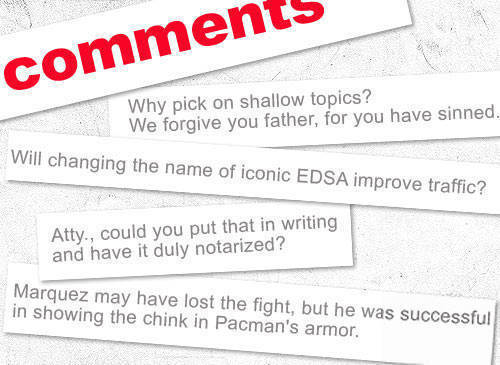 (SPOT.ph) We love hearing from our readers, a passionate group not apt to let a moment pass without sounding off on issues, stories and reviews. Following last year’s list, we’ve culled the funniest, most insightful, honest and witty comments. Here, our top 50 favorite comments for 2011:

47. "At least you know Vic Sotto won’t have a leaked video when the relationship ends."

46. "Ma’am Charo and all the gods of ABS-CBN must be calling an emergency meeting right now."

45. "It wasn’t just Cory who challenged the Marcos dictatorship. Dream on and let that overrated drama live on."

43. "I don’t think that the world would respect Pacquiao this way if he was fighting "irrelevant" fighters."

41. "How unfortunate that no matter how intelligent our opinions may be, they will remain unread and unheard by the people who make decisions."

39. "The tongue is the sword that slits the throat. Remember that ladies."

BLACK DEATH on Shaina Magdayao comes clean about texting Ruffa Gutierrez: "I told her to leave us alone"

KORORO on Exorcist priest leads ritual outside CCP to make up for "sinful" exhibit; Manila Cardinal declares Aug. 26 as "Day of Penance"

36.  "I believe we should ask the new secretary the following question: how can we help in your tourism campaign?"

34. "What we need is an energetic Cheer Leader who can sell refrigerators to the Eskimos."

33. "Freedom of expression is a universal declaration. The US blueprint may be a guide but not the only model."

32. "Only a demon can recognize another demon who might have surfaced from hell."

DAN on Senators Estrada and Sotto threaten to slash CCP budget, Estrada says "blasphemous" art piece could only have been done by demon who surfaced from hell

31. "If everybody needs to pay taxes, where do our taxes go?"

30. "We don’t need to hurt each other just because we believe in different things."

29. "Why pick on shallow topics? We forgive you father, for you have sinned. "

28. "Marquez may have lost the fight, but he was successful in showing the chink in Pacman’s armor."

27. "It’s sad that this new age tool of communication has been widely used to spread misinformation."

DAN on VIDEO: Annabelle Rama fires off no-holds-barred tirade after she "almost punched" Nadia Montenegro in front of state prosecutor

25. "This is about a scorned lover who couldn’t face the fact that his lover no longer wants him."

24. "The problem with Filipino die-hard fans is that their loyalty crosses the private lives of their idols."

SOLILOQUY on Ruffa Gutierrez bares all in "text debacle" vs. Shaina Magdayao; tells John Lloyd Cruz: "I’d be the happiest when you can finally be a real man"

23. "You know you’ve arrived when you have such polarizing effect on those who read your stuff."

21. "You only live once. But if you live it right, once is enough. He is the perfect example of that."

20. "He should spend his money somewhere else. He became famous and successful, without them."

19. "Atty., could you put that in writing and have it duly notarized?"

18. "I’d love to hear from the drivers, helpers, and guards about the things that "Ang Galing" party did for them."

NO HOPE PHIL on Rep. Mikey Arroyo leaves for the U.S. after paying P180,000 bond

17. "His conscience is so clear, he appears to have none at all."

WHAT A CROC! on Monster croc Lolong gets own "nature park"; hunt for another "bigger" crocodile starts in October

14. "I guess the security guards’ magic wand didn’t work out as planned this time now did it?"

13. "May I respectfully suggest to require brain scanners in Congress?"

12. "Will changing the name of iconic EDSA improve traffic?"

10. "If the crocodile isn’t eating, they should try feeding him our politicians. "

9. "The government, and yes even the church does not have the right to choose which people to protect or provide for. Every human being here in this world has that right."

BABAITA on CBCP targets gay rights provisions in anti-discrimination bill, fears it may pave the way for same-sex marriages

FAMAS on Gloria Macapagal-Arroyo’s fingerprints, mugshots taken by police in her hospital room

DON GEPOT on Sen. Lito Lapid says he fears RH Bill debates due to his "poor English" and lack of education

6. "I don’t know if Spot made another mistake. Based on the list of names above, the title could have possibly been "5 possible boyfriends for Papa P (In case it doesn’t work out with KC Concepcion)." lol. I am not sure, SPOT, but setting up KC with at least 5 guys from the list above might give her the same problems she is encountering now with Papa P."

4. "Why not raise a bill to execute lawmakers who come up with silly resolutions/laws/acts?"

3. "There really are a lot of snakes in NAIA. Cold-blooded and predatory, they look for prey frequently at customs check points."

FLYBOY on Another python captured in NAIA

2. "All I can say is she’s been a good chess player with whatever she’s been thrown with so far."

GAME OF POLITICS on Gloria Macapagal-Arroyo postpones travel plans, aide says she is now "too weak"

1. "Anyone there who wants to make an article titled, "Umasal lamang ng ayon sa talino"?"

Comments Of The Year Commentsof2011 Topcommentsof2011
Your Guide to Thriving in This Strange New World
Staying
In? What to watch, what to eat, and where to shop from home
OR
Heading
Out? What you need to know to stay safe when heading out