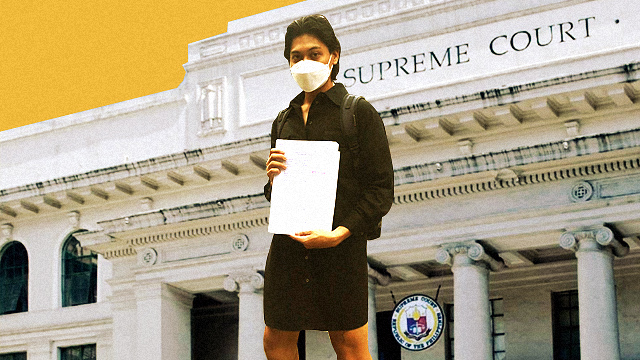 Macoy Dubs coming in hot with our right to Internet freedom.

(SPOT.ph) Any ordinary person filing a petition at the Supreme Court would always dress for the occassion—but Macoy Averilla, a.k.a. Internet personality Macoy Dubs, isn't just your average person, and the petition he filed at the country's highest court wasn't any run-of-the-mill petition either. Averilla was one of 19 "concerned online citizens" who filed a petition at the Supreme Court versus the Anti-Terrorism Act of 2020 on July 29—and he did all that while wearing heels.

Averilla posted a pic of his outfit on his Twitter page, and the very special OOTD consisted of a collared shirtdress and sky-high nude heels—with special attention to the just-filed petition he was holding up. "Susukat ang heels pero di susuko," wrote Averilla, adding the #RampaSaKorteSuprema. The group labeled the campaign #COCBlockAntiTerrorLaw—with COC standing for the very PG "Concerned Online Citizens."

In a world where—let's face it—what you wear holds sway over how people will treat you, Averilla's outfit was more than just a gig to get attention. The heels, as Averilla explained, were worn several sizes too small on purpose: "It's not because I want to make a scene, but because I want to represent the hardships of [Locally Stranded Individuals]," he explained, referring to the hundreds of stranded individuals who were forced to take refuge at the Rizal Stadium, waiting for the chance to go home.

The "power suit" was traditionally reserved for men. In its original form (read: tailored, boxy suits), these outfits were sported by mostly white males in positions of authority. It wasn't until the '70s and '80s when women who were joining the workforce began using their clothes to assert authority as well—and by using outfits that were a far cry from the tailored ones their male counterparts used. In the Philippine context, think Imelda Marcos and her luxurious butterfly-sleeved ternos, as opposed to Cory Aquino's yellow blouses and softly colored dresses.

It's interesting to see Averilla use the subversive power suit—complete with symbolic heels—to petition against the Anti-Terror Act of 2020. Needless to say, the outfit brought some much-needed attention and ideally, added another fresh layer to the conversation. Plus, who doesn't love it when a true Queen manifests?

the heels r giving me the air to breathe pic.twitter.com/lLtLvYqUMO

Adventurer Savvy Macoy Dubs Juan Miguel Severo Anti-terror Law Government
Your Guide to Thriving in This Strange New World
Staying
In? What to watch, what to eat, and where to shop from home
OR
Heading
Out? What you need to know to stay safe when heading out