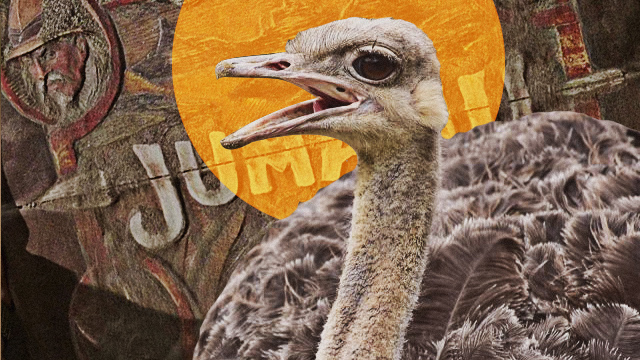 People had a lot to say about the curious incident.

(SPOT.ph) It seems that we'll remember the first day of the Metro's return to MECQ with fond memories of ostriches taking a walk in a QC village. The two flightless birds were finally caught at around 11 a.m. on August 4—says Dino Rivera, one of the people who took a video of the birds, in an interview with SPOT.ph. According to Rivera, there were actually two ostriches that took a spirited romp through the Mapayapa Village (which it certainly wasn't while they were running amok) before authorities managed to capture them. The large birds reportedly belong to the owner of a lot near the village, the guards told Rivera.

Based on the pictures, it took a large number of people to subdue the animals—but it only took a couple crazy videos of the ostriches running through residential streets to get the internet in a frenzy. Unsurprisingly, there were a lot of questions to be asked, such as a general "Why?" and a whole lot of disbelief, plus some on-the-ground videos to of people reacting to the ostriches' freedom run.

The first ostrich captured was in an okay state, confirmed Pedro Pacis, Homeowners Association president of the village, to ABS-CBN News. According to the report, the ostriches were being kept in a fenced lot along Narra Street as the homeowner's house is under construction. It is not clear if the animals are being kept as a pet or otherwise.

"Ostriches held in captivity are invariably stressed and deprived of all liberties, and they will employ their intelligence and dexterity to escape if they can," said Nirali Shah of People for the Ethical Treatment of Animals Asia in the report. "It's no surprise that this ostrich longed to be free. Even under the best of circumstances, captivity cannot begin to replicate wild animals' habitats, relationships, or freedom to make choices."  She added that the animals should have been brought to a veterinarian after its brief escape.

While there have been many voices raising concern for the large birds, many have also been amazed at the sudden and strange appearance of the animal in the Metro. As of writing "Jumanji" is a top trend on Twitter, with people referencing the board game from the adventure movie series of the same name. People are undoubtedly in need of a bit of a laugh in these trying times, so we round up a couple of the most hilarious and realest reactions we saw:

According to the quality narration, these large birds are actually "some goose, brah."

Ben&Ben brings in the feels.

At least this bird knows how to follow the rules.

Adventurer Savvy Seasoned Humor Ostrich Quezon City Trending
Your Guide to Thriving in This Strange New World
Staying
In? What to watch, what to eat, and where to shop from home
OR
Heading
Out? What you need to know to stay safe when heading out