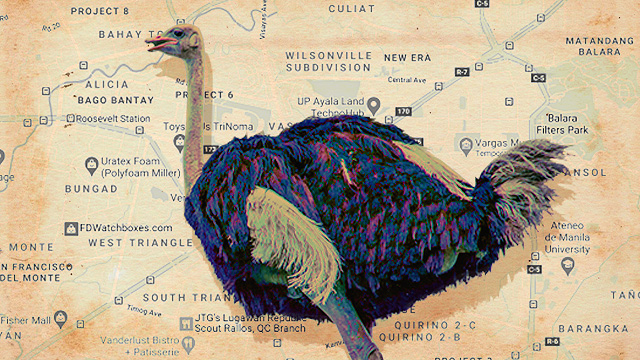 (SPOT.ph) So it's officially the first day of Metro Manila's return to a modified enhanced community quarantine and granted, the times are even stranger than we've gotten used to since 2020 began. But here's a real clincher: A video of an ostrich running in a Quezon City subdivision is making the rounds online. Yes, you read that right. A giant, two-legged, flightless bird with brains smaller than its eyeballs, is running loose in the city.

The original video was posted by Dino Rivera, who told GMA News Online that he was just going about their business buying stuff from a nearby neighborhood store when it happened. As of writing, there is no news of anyone claiming ownership of the escaped ostrich—if it is even a pet (it's the most logical explanation, really)—or any real reason as to why there is an ostrich running loose in QC.

Unsurprisingly, amid all the crazy stuff going down in Metro Manila, the sudden appearance of the ostrich has given people something new and, thankfully, different to think about. Others, meanwhile, are amazed at the content of the video itself and no longer needed actual context to appreciate its majesty.

Lav Diaz, but only if he made super short films.

While we hunt for the real answers, we thought of some completely made-up reasons for the ostrich dashing on the street:

Adventurer Savvy Seasoned City Life Quezon City Covid-19 Tpc-000001 Trending
Your Guide to Thriving in This Strange New World
Staying
In? What to watch, what to eat, and where to shop from home
OR
Heading
Out? What you need to know to stay safe when heading out