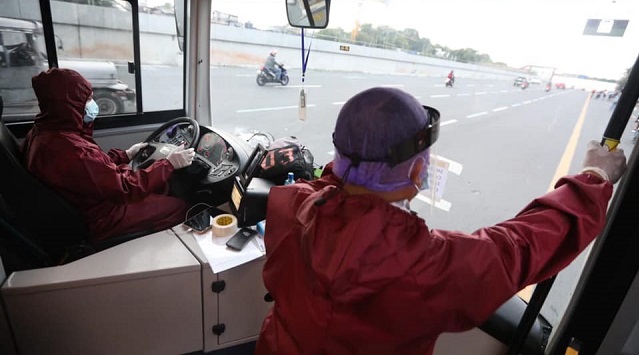 With just one day to prepare, Metro Manila returns to a heightened quarantine.

(SPOT.ph) August 4 marks the first day of a modified ECQ in Metro Manila—a measure taken following a distress call from frontliners—and as everyone adjusts to the shift, the roads have once again changed. Mass transportation has been suspended under the MECQ, checkpoints and quarantine passes are once again part of the daily commute (for those allowed to leave the house), and pillion riding is disallowed again, with an exception for essential workers.

While the one-day preparation for the two-week long MECQ had people rushing to the grocery stores and supermarkets on August 3, the first morning had a similar effect. We round up scenes from around Metro Manila as people adjust to the shift. There were free shuttle services, new rules and regulations from local government units, checkpoints, and of course, workers trying to make their way without public transport. Is it too much to hope that the government would use the next two weeks to come up with a plan that would actually manage the effects of COVID-19 on the country?

Congestion was experienced at checkpoint areas between city boundaries.

Not all companies could provide safe shuttles for workers.

People had to walk along Commonwealth Avenue in the dead of the night.

Walking was the best alternative left for some.

While bikes are another choice for those who have them.

Manila Mayor Isko Moreno announced that tricycles and pedicabs will be allowed to operate during MECQ.

EDSA was relatively smooth-sailing early in the morning.

Meanwhile, there were also checkpoints at EDSA-Ortigas.

Members of the PNP-HPG checked up on motorcyclists.

The free shuttle service provided by the Office of the Vice President Leni Robredo resumed operations to serve frontliners.

Adventurer Savvy City Life Covid-19 Covid-19 News Commute
Your Guide to Thriving in This Strange New World
Staying
In? What to watch, what to eat, and where to shop from home
OR
Heading
Out? What you need to know to stay safe when heading out