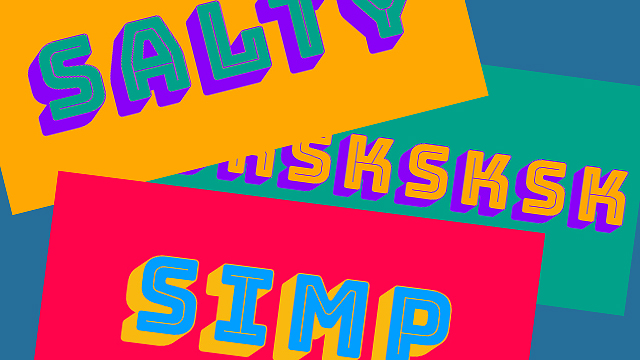 10 Gen Z Slang Terms And What They Really Mean

"Sup," apparently, is not short for susmaryosep.

(SPOT.ph) Language is always evolving. Different subcultures and generations have made-up words that may or may not be found in the dictionary and, often, don’t mean what other people think they meant. And while we just caught up with millennial terms like carps and scoobs, kids today a.k.a. Gen Z (born from 1997 to 2012) have come up with their own slang that would again take some getting used to.

Here are 10 GenZ Slang slang terms we often hear, what we—the elder millennials—thought they mean, and what they actually mean as verified by our resident Gen Z-ers:

What we thought it meant: Taste of salt, like soy sauce and fish sauce

What it actually means: A feeling pertaining to being unnecessarily annoyed, angry, upset, or bitter.

How it got there: Could be a stretch, but salty dog or old salt turns out to be slang for someone who has sailed for so many years.

Example: "She’s salty because she lost a bet."

I hate it here

What we thought it meant: Just a general feeling of hate

What it actually means: A general response to something disgusting, confusing, or generally hellish. Can also be used to get yourself out of an embarrassing situation or being put on the spot.

How it got there: According to Urbandictionary.com, "I hate it here" is commonly used on stan Twitter—that section of the social media platform with cult-like fandom. Memes or GIFs, like that of The Karate Kid's Dre Parker (played by Jaden Smith) and Rugrats’ Baby Stewie just blurting out the phrase, are also used to put the message across.

Example: "News say we may not reach herd immunity for a long time.” “I hate it here."

What we thought it meant: Short for "simple"

What it actually means: Someone who’s trying too hard or doing too much for the person they like, often in a derogatory manner.

How it got there: According to Merriam-Webster, simp—first used in the 1900s—is short for simpleton and is synonymous to doofus.

In a longread by The New York Times in July 2020, the word became an insult towards women for being "soft" or "overly sympathetic" in the 1980s. In the 2010s, it was later popularized by anti-feminist movements, particularly in the "manosphere" and is used as a misogynistic insult towards men who have gone "too soft" for doing nice things for women they like. It once again gained popularity on TikTok in 2019 to shame a person, often a man, who throws money or attention at someone else, often a woman, to win their affection. The New York Times article argues that it is sexist because "the word expresses discomfort with equality when it comes to gender, and offers a simple way to dismiss the people causing that discomfort."

What we thought it meant: Short for the name Stanley

What it actually means: A noun referring to an obsessive fan, or a verb referring to the act of being that overzealous fan. It doesn’t always have to apply to celebrities or personalities. You can also stan a friend or a colleague’s actions that are laudable.

How it got there: The term is extremely popular in the rap and hip-hop community since “Stan” comes from the title of a popular Eminem song released in 2000. It’s about a man named Stan who became too obsessed and went over the edge when his idol Eminem didn’t answer his fan mail. It was eventually added to the Oxford English Dictionary in 2017.

"Stan" is also said to be a combination of "stalker" and "fan" since a stan can sometimes be a stalker fan, but not in a creepy way. We hope.

Example: "She finally broke up with the jerk." "We stan."

What we thought it meant: A variation of a keyboard smash like “asdfghjkl”

What it actually means: A filler expression of excitement, or when you don't know what to say.

How it got there: According to BuzzFeed News, "sksksksk" is widely used by "VSCO girls"—a subculture of scrunchie-wearing, Birkenstocks-wearing girls who heavily use the VSCO app for photo editing. It is a keyboard smash that's specific for typing on a phone keyboard where our thumbs naturally rest on "s" and "k."

What we thought it meant: A variation of yet, as in "not yet" or "not yeet"

What it actually means: A verb referring to "to throw"; or an exclamation expressing excitement, say "yes," a battle cry, or even a dance move.

How it got there: Huffington Post said it likely became popular because of a 2014 Vine video of someone throwing a can while shouting "yeet."

What we thought it meant: Striking the face with the palm of your hand (see: sampal)

How it got there: Dictionary.com traced the origins of the slang "slaps" to words commonly associated with successful songs like "smash hit," "jam," or “bop.” It just makes sense that slap, which is also a form of smack-dab force, is one of them. Plus, "slap" was originally an adjective for "first-rate" back in the 1800s, and an adverb meaning "excellently" in the 1700s.

What we thought it meant: Who knows? Why are we filling in blanks? Is this an exam?

What it actually means: You fill in the blank with something you can't stand, often used as an insult.

How it got there: The phrase started out as a TikTok trend where friends roast each other. Of course, it came with a hashtag: #ItsForMe. It indicates a certain characteristic or behavior of someone else that really annoys you.

Example: "It’s the loud typing for me."

What we thought it meant: Checking messages on Viber

What it actually means: A quick check of the general attitude in a situation. It can be something pleasant like checking in on your friend, or a general warning when you're about to hit someone softly with your fist (because, apparently, that’s a good way to check if someone’s fine).

How it got there: Its first-ever crowd-sourced definition was posted on Urban Dictionary in 2011 to refer to "a process by which a group or individual obtains a subjective assessment of the mental or emotional state of another person, place or thing." But it eventually rose to popularity in 2019 when Tumblr posts used it ironically and showed memes of the more violent definition of vibe check.

Example 1: "You have passed the vibe check." (after a friend sends you a random meme and you respond as proof of life)

Example 2: "I met her new boyfriend and he did not pass the vibe check."

What we thought it meant: Short for susmaryosep

What it actually means: Short for suspicious

How it got there: It’s commonly used in the game Among Us, where players have to guess who’s the impostor based on their suspicion.

Example: "When you see something sus, just make a run for it."

Genz Staying In Millennial Adventurer Savvy Seasoned Slang Heading Out
Your Guide to Thriving in This Strange New World
Staying
In? What to watch, what to eat, and where to shop from home
OR
Heading
Out? What you need to know to stay safe when heading out