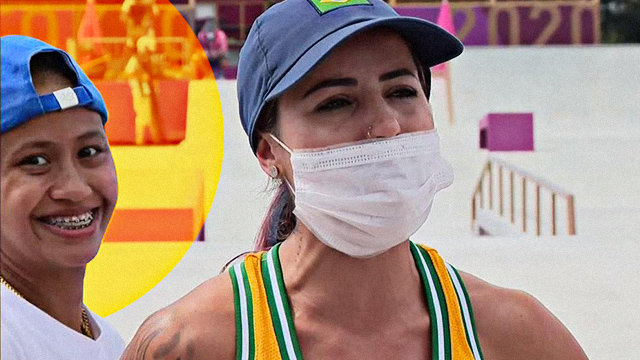 (SPOT.ph) Our athletes have been doing great at the Tokyo Summer Olympics. Weightlifter Hidilyn Diaz bagged the Philippines' first-ever gold medal, while featherweight boxer Nesthy Petecio is in the running for at least a bronze medal. Street skateboarder Margielyn Didal may have bowed out of the competition on Monday, July 26, after clinching the seventh place, but the global stage will definitely never forget her face—literally! The 22-year-old from Cebu "photobombed" a number of Olympics snaps and danced her way onto international television (and livestreaming).

Also read:
Hidilyn Diaz Just Lifted the Entire Nation to Our First-Ever Olympic Gold Medal
Two Filipinas Have Given Us Our First Multi-Medal Olympic Win in Nearly a Century

Smiling at the camera during Italian player Asia Lanzi's run.

Still having fun during the introduction of players.

The Olympics dubbed her signature thumbs-up as the "Margielyn Didal seal approval."

Showing off some dance moves while waiting for her turn.

She may just have won Miss Congeniality.

Blessing everyone with that smile.

Didal rose to fame after competing at the 2018 Asian Games in Jakarta, where she won a gold medal for the Philippines. In 2019, she again bagged the top spot during the 30th Southeast Asian Games. She failed to make the finals in the 2021 World Street Skateboarding Championships in Rome, but her ranking was enough to qualify her for the Olympic debut of women's skateboarding.

Margielyn Didal Tokyo 2020 Tokyo2020 Adventurer Savvy Seasoned Humor Trending
Your Guide to Thriving in This Strange New World
Staying
In? What to watch, what to eat, and where to shop from home
OR
Heading
Out? What you need to know to stay safe when heading out