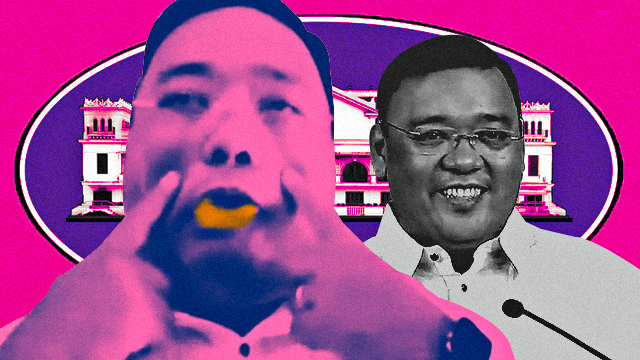 All the Times Harry Roque Trended for His Online Interviews

A video of the presidential spokesperson berating doctors has gone viral.

(SPOT.ph) A video of Presidential Spokesperson Harry Roque's outburst has gone viral on Friday, September 10. The Inter-Agency Task Force meeting included healthcare workers, who were opposing Malacañang's decision to loosen quarantine restrictions despite an increase in COVID-19 cases in the country. The clip, which was released by Philippine Daily Inquirer's Marlon Ramos showed an angry Roque saying, "This group, they have never said anything good about government response."

According to reports, Roque also told the healthcare workers: "Do not sit there as if you are the only ones right. We’re trying to achieve total health. Who wants COVID to kill people? Are you saying that only medical frontliners are concerned about the health of the people? We all want to save lives."

“For crying out loud. No one in the government wants a single life lost. No one! How dare you think that we are not considering steps to prevent the loss of lives,” the spokesperson added.

Earlier, Roque told Super Radyo dzBB that IATF meetings are supposed to be a "secret."

A few other times Harry Roque went viral for his outbursts in front of the camera:

When he stuck his tongue out during an interview

In a News5 interview, Roque was asked by Deretsahan host Luchi Cruz-Valdes "how much unity is there really within the cabinet." The spokesperson admitted that "there are Cabinet members who [he] absolutely abhors." Valdes interjected and asked him who these officials are. Roque replied, "Ayaw," then laughs. "Ganito. Bleh!" and stuck his tongue out.

When he scolded the wrong reporter

Roque argued that the report (which isn't Terada's) made it look like the government had no policy on "expanded testing." The May 18 article in question was published with the headline "Up to private sector to carry out mass testing, Roque says amid limited testing capacity," and pointed out that "the government still has no plans to carry out mass testing to detect COVID-19 infections in the country." The government, the article said, is implementing what they call a "progressive" testing program.

On May 20, Roque said he was misquoted. "I think it was very clear. It was a wrong quote, it was a misquote because the context that the mass testing had to do with the Wuhan-type testing was omitted," he explained. The spokesperson also claimed CNN Philippines has "corrected" the article, thus admitting the mistake; but the report actually remained unedited. The media outlet released a statement to clarify that Terada did not write the story and to assure the public that they "reported the facts in the May 18 story." Roque refused to publicly apologize to the CNN Philippines reporter.

In CNN Philippines' The Source on January 20, Pinky Webb asked for Roque's reaction to University of the Philippines journalism professor Danilo Arao's challenge about the recent abrogation of the time-honored UP-DND accord. "UP faculty and alumni who are Duterte's top-level officials should denounce Lorenzana's letter terminating the 1989 accord. This disregards everything that UP stands for. Should they remain silent, a six-word question: Where is your honor and excellence?" said Arao in a tweet. (FYI: Roque studied for his Bachelor of Laws in UP and taught constitutional law and public international law at the state university for 15 years.)

Roque refused to react directly, but Webb pressed on: "Dine-denounce niyo ho ba ito? We're not speaking as a presidential spokesperson." The official replied that there is "really no such thing when you are a presidential spokesperson," referring to his own opinion about the issue. After a break, the spokesperson claimed that it was an "unfair question," adding, "In the first place, why am I duty-bound to follow anything that Professor Arao says?"

Webb clarified that she wasn't saying that Roque was duty-bound, and that it was just a tweet—"a tweet that I read and I asked for your reaction. I am trying to be fair, Secretary Roque," she said, with a hair flip.

When he said that we are winning against the pandemic

On June 30, 2020, Roque congratulated the Philippines for "beating" predictions set by the University of the Philippines for the COVID-19 infection rate. The projection was at 40,000 cases by the end of June that year, but according to the spokesperson, this did not happen as his final number was at 36,438. It should be noted that the Department of Health had around 10,000 samples of backlog that day. "Panalo na tayo," Roque said as he pumped his fist in the air during a briefing.

More than a year later, we've breached the two million-mark for total number of COVID-19 cases in the Philippines. The daily rate of 22,820 was also recorded on September 9, an all-time high since the pandemic started. That celebratory fist pump did not age well.

Also read: All the Institutions the PH Has Proven Wrong

When he said that a question was "un-Christian"

On April 10, Roque was admitted to a local hospital for COVID-19 treatment. This was amid long queues at health facilities in and around Metro Manila, with some even dying in their own cars or outside emergency rooms after not being able to get a hospital bed. When asked on Monday, April 12, how he was able to secure a hospital room despite the scarcity, Roque replied: "With all due respect, that is an un-Christian question."

The Department of Health announced a total tally of 2,179,770 cases in the Philippines as of September 10. The number of new cases is at 17,964 with a positivity rate of 28.9%, the second highest record in the country. According to herdimmunity.ph, the Philippines has vaccinated at least 14.11% of the population (15,549,667 Filipinos). The current vaccination rate is at 420,080 inoculations daily, which means that it will take about eight more months (May 2022) to fully vaccinate 70 million Filipinos.

Harry Roque News Adventurer Savvy Seasoned Trending Staying In Video Calls
Your Guide to Thriving in This Strange New World
Staying
In? What to watch, what to eat, and where to shop from home
OR
Heading
Out? What you need to know to stay safe when heading out