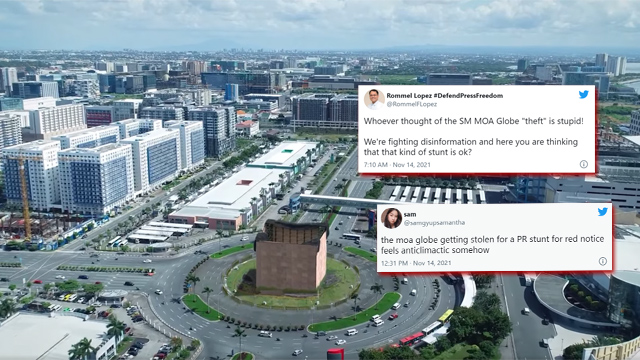 The "conspiracy" started on Saturday night.

(SPOT.ph) A few media outlets on Saturday night, reported that the SM Mall of Asia Globe has supposedly gone missing. Yes, that 31-foot steel structure on a roundabout in front of the mall that's been around since 2006. SM Mall of Asia (MOA) management also released a "public notice" at midnight, saying that they are "currently working with authorities in investigating the MOA Globe incident." But as what people online already know, it turned out to be a publicity stunt for the Red Notice, which dropped on Netflix on November 12. This was revealed through the streaming platform's accounts at exactly 12 noon on November 14.

Also read: Netflix's Red Notice Doesn't Take Itself Too Seriously and You Shouldn't Either

What's dubbed by Netflix as "the biggest con while you were sleeping," the "conspiracy" started when a staged video showing what appeared to be a helicopter hovering over the MOA globe was circulated online on November 13, 11 p.m. More "photos" surfaced well until Sunday morning, including those apparently taken by a taxi driver and a commuter, showing police officers at the scene investigating the "crime"; an aerial footage of the empty board-up by a supposedly drone enthusiast; and even a video of the surroundings by a passerby.

But other people online are not too amused, especially with everything that's been going on in the news:

Do we really need more #fakenews?

People already called it even before the big reveal.

People thought it's about IKEA.

Trending Heading Out Staying In Twitter Sm Mall Of Asia Netflix Red Notice
Your Guide to Thriving in This Strange New World
Staying
In? What to watch, what to eat, and where to shop from home
OR
Heading
Out? What you need to know to stay safe when heading out