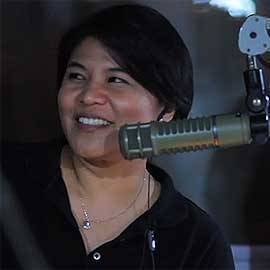 Why You Do What You Do: Gang Badoy

Watch this week’s WYD feature to find out why Gang Badoy rocks!

Here’s a woman who proves that school is cool and that you can learn in more ways than one.

In July 2005, former WTHR-NBC Eyewitness News in Indianapolis Desk Editor Gang Badoy founded Rock Ed Philippines, a "volunteer group that aims to rock society" through a series of alternative education projects. Rock Ed has used music, dance, graphic design, sports, literature, film, theater, cultural studies, and other alternative approaches to encourage involvement and critical thinking among the youth. Among the successful Rock Ed projects are Rock Ed Radio (which aired its third to the last episode on October 21 via the radio station NU 107), Rock the Rehas, Rock the Riles, and RockBayan.

At 40, Badoy still rocks with energy. Director Nicky Daez shares: "Gang was very passionate and contagious on and off cam. She had a lot of opinions and ideas and was just bursting with energy. I enjoyed listening and conversing with her because it was very mentally stimulating."

Get a glimpse of the very driven Gang Badoy doing what she loves to do. (For more on WYD, log on to www.wydmnl.com.)

The Why You Do What You Do (WYD) team also had the chance to join Badoy in one of her prison visits to Bilibid. "At first it was intimidating because for one thing, it was a prison. But after we met some inmates and had the chance to talk to them, everything seemed normal. They were actually very hospitable. It really broadened my perspective," says cinematographer Marco Limjap.

Just like her energy and enthusiasm, Badoy’s advocacy is also contagious. According to producer Julo de Guzman, the Rock Ed founder has "made us want to do more episodes and use it as a channel to inspire the youth to stand up for something and contribute to nation-building." He also agrees with Badoy’s approach to educating the youth: "She is using her passion for music as an instrument of giving back...Moreover, music is a way of expressing oneself; it is a means of voicing out so it is the perfect medium to say something and stand up for a social cause. Gone are the days of apathy. Do what you love and do it while giving back."

To know more about Rock Ed Philippines, log on to www.rockedphilippines.org.

Read "Why You Do What You Do: Carlos Celdran."

Read "Why You Do What You do: Rhett Eala."

Read "Why You Do What You Do: Norman Black."

Why You Do What You Do: Gang Badoy Gangbadoy Rockedphilippines
Your Guide to Thriving in This Strange New World
Staying
In? What to watch, what to eat, and where to shop from home
OR
Heading
Out? What you need to know to stay safe when heading out