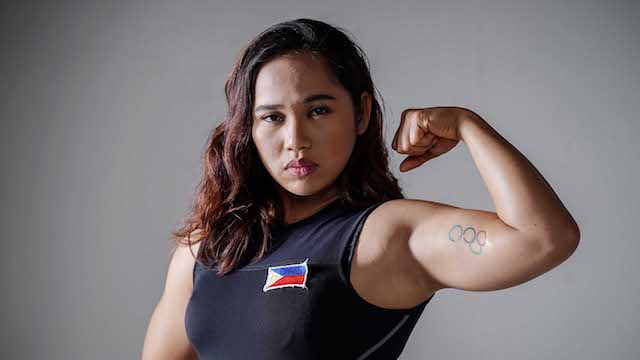 Weightlifter Hidilyn Diaz is officially the country's first-ever Olympic gold medalist. On July 26, Diaz bagged a gold medal and made a world record at the women's 55-kilogram category at the Tokyo Olympics. Diaz lifted a total of 224 kilograms, breaking the previous record of Liao Qiuyun of China.

Having just turned 30 years old in February, she has been competing internationally for more than a decade. The stocky weightlifter, who, in real life, stands a little less than five feet tall, is truly one of the giants of Philippine sports, as proven by her current run in Tokyo 2020—her fourth straight appearance at the Olympics.

Diaz grew up in a small village called Mampang near Zamboanga. She is the daughter of a farmer turned tricycle driver, and grew up poor in a family of eight, with the thought of sports furthest from her mind.

In fact, she wanted to be a banker, just so she could be close to money and her mom would stop complaining about it (or rather, the lack of it).

But a local weightlifter, Elbert Atilano, as well as a cousin, Catalino Diaz, both saw the 10-year-old Hidilyn's build ("Parang brusko," as Catalino said to ABS-CBN), and knew that she had the potential to be a strong weightlifter. She began training with makeshift barbells made from plastic pipes with cast concrete weights at either end. Her first real barbell soon broke from overuse.

In 2002, she joined her first-ever competition in weightlifting at the 2002 Batang Pinoy games in Puerto Princesa, where she was one of a very small handful of participants in the sport. She won gold then because, as she told SPIN.ph back in 2016 with a smile, "wala akong kalaban."

In 2007, Diaz joined her first Southeast Asian games, clinching bronze in the 58-kilogram category. Just a year later, at 17 years old, she followed in Solis' footsteps, heading to the 2008 Beijing Olympics as a wild card entry. As in the previous year's SEA Games, she competed in the women's 58-kg class. She placed 11th out of 12 weightlifters—the start of a journey that would take her all the way to Tokyo 2020.

Her next two SEA Games, in 2011 and 2013, would see her ascend to second place on the podium. She also began to join more international competitions, winning the top spot in the Asian Weightlifting Championship in 2015.

In London for the 2012 Olympics, though, she struggled with three unsuccessful 118 kg clean and jerk attempts. Diaz ended with a DNF—"did not finish"—a result that only fueled her fire even more.

Unknown to many at the time, she was dealing with a host of problems prior to London, as she told SPIN.ph, including the mounting toll of injuries, as well the unexpected departure of a trusted coach.

Four years later, though, Diaz would make her mark in Philippine sports history, giving our country with its second-ever silver medal (and first from a Filipina) in the global games. She surmounted heavy odds, beating two favored weightlifters: Chinese-Tapiei's Hsu Shing-Ching and China's Li Yajun.

From the report of SPIN.ph lensman Jerome Ascano back in Rio 2016:

Diaz lifted a total of 200 kilograms to finish second behind gold medalist Hsu Shu-Ching of Chinese Taipei in the women's 53-kg class, ending a medal dry spell that dates back to boxer Mansueto 'Onyok' Velasco's silver in the 1996 Olympics in Atlanta.

The Filipina actually had a slow start when she only lifted 88 kilos in the snatch to finish fifth at the halfway mark of the competition.

Li quickly showed the way, following her record-breaking feat at 101 kgs, followed by Shu-Ching with 100.

But Diaz bounced back in the clean and jerk, lifting 112 kilos on her second try to surpass third-running Yoon Jun Hee of South Korea and assure herself of a podium finish.

"Thank you, Lord," she shouted shortly after.

Setting Her Sights on #Tokyo2020

Diaz's feat turned her into a household name; her life story even became an episode of Maalala Mo Kaya. Two years later, in the Asian Games in Jakarta, Diaz would go on to deliver another gold for the Philippines, conquering the weightlifting women's 53kg division.

It was also the year that Diaz began to take a firmer hold on the reins of her career. She set up her own team that, by 2019, would evolve into Team HD—a compact group of trainers and coaches, all dedicated to keeping Diaz in top shape. She also began to speak out more strongly for athlete's rights.

As early as then, she was already laying the groundwork for the Tokyo 2020 Olympics. In 2019, a year before the Tokyo games were supposed to kick off, she clinched a silver in the 2019 Asian Championships, and, just before the year ended, delivered yet another gold in the SEA Games.

Then, when the global lockdowns hit in March 2020, Diaz found herself stuck in Malaysia. Team HD was supposed to do more intensive training in Taipei. But travel restrictions kept Diaz in Selangor, Malaysia, which would become her home for the next year.

It was a difficult time for Diaz. Speaking with SPIN.ph, she admitted to feelings of frustration and anxiety over the uncertain state of the games. But, like before, she buckled up, gritted her teeth, and focused on her goal.

As restrictions eased and the Tokyo games were officially a go, Diaz flew to Tashkent, Uzbekistan for the Asian Weightlifting Championships—an event that, just by showing up, would officially qualify her for the Tokyo Olympics. "It will serve as a tuneup for me," the world no. 2 told SPIN.ph.

Her long road has led up to this. For Diaz, it will likely be her final swan song in the Olympics... but, as she told the media, she's still keeping her options open.

Syn-00263 Syndication Adventurer Seasoned Savvy Staying In Hidilyn Diaz Tokyo2020 Olympics Weightlifting Sports Hard News Followup
Your Guide to Thriving in This Strange New World
Staying
In? What to watch, what to eat, and where to shop from home
OR
Heading
Out? What you need to know to stay safe when heading out