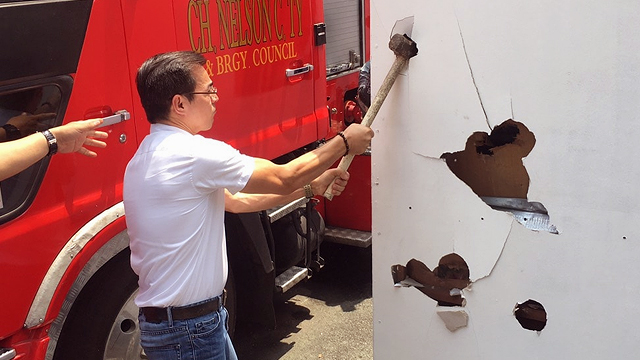 What a way to cap off a busy week.

(SPOT.ph) After new Manila Mayor Isko Moreno vowed to preserve Arroceros Forest Park and restrict construction of high-rise buildings near heritage sites like Quiapo Church, he now had his hands dirty—almost literally—after a surprise visit in Binondo on Friday morning, July 5. The mayor himself started tearing down a barangay hall-turned-barracks that was obstructing the view of Roman Ongpin's monument along Ongpin Street.

"O ayaw niyo ng diplomasiya ha. Wala tayong makuha, nagdi-diplomasya tayo. Nanggagalang tayong puwesto," Moreno was heard muttering in a live video uploaded on his official Facebook account. He was referring to Barangay 289, Zone 27 Chairman Nelson Ty's denial of ownership of the structure. The newly elected mayor then proceeded to pound on its walls with a sledgehammer, revealing a double-deck bed and some firefighters' equipment. It is right next to Chinese Binondo Fire Prevention Association's firetruck, which is illegally parked and obstructing the road.

"Nakakahiya naman kay Ongpin. Heritage natin 'yan. That will remind us that you do good things, you will be immortalized," he told reporters after ordering that the whole structure be removed and the firetruck be towed. He reiterated that the Filipino-Chinese businessman was recognized by the state and the presence of an illegally placed barangay property right beside it is just "unacceptable."

Ongpin—a philanthropist and nationalist businessman—was known as the financer of the Katipuneros during the armed struggle against Spanish colonial rule. Aside from providing ammunition and money, he allowed the revolutionaries to use his store in Binondo called El 82 as a hideout. He was also the first local merchant to introduce "fixed prices."

Less than 24 hours earlier, Moreno expressed his rejection of "photobombers" around heritage sites. His office is currently reviewing previously approved plans to put up a 37-storey commercial building behind Quiapo Church.

With the long list of heritage structures once forgotten (and even ordered for demolition) by the previous local government of the City of Manila, Moreno has his hands full.