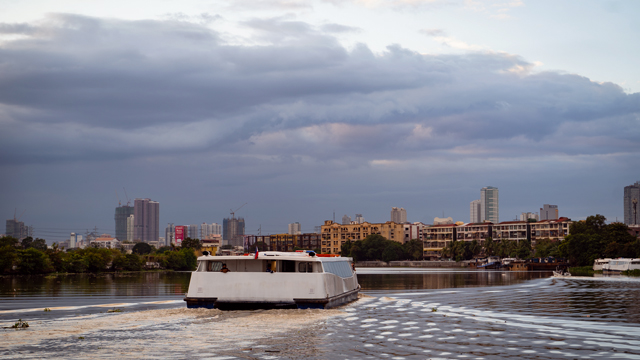 The Pasig River Ferry Isn't What You Think It Is Anymore

Check out all the cool things you can spot!

(SPOT.ph) The Pasig River isn’t exactly on anybody’s bucket list, but we’re here to tell you why it deserves a spot. The river is one of the main reasons Metro Manila is the way it is today and a ride along its currents tells a different kind of story each time. And as a plus point, there’s way less traffic on Pasig River than there is on the city streets.

If you’re having a hard time seeing yourself enjoying a cruise down the river, then we’re here to tell you it’s best to forget all the old stories you’ve heard about the no-longer-as-polluted-as-before channel. We round up 10 cool sights to check out on the revamped Pasig River Ferry service.

Also read:
The Revamped Pasig River Ferry System May Just Be the Secret to Beating Manila Traffic
See Manila In New Light With a Cruise Through Pasig River

Here are 10 cool things to spot from the ferry along Pasig River:

First off, you may want to note that cameras and phones must be put away when your boat passes alongside the country’s presidential palace—and pictures are the biggest no-no of all. Prepare yourself to take a mental picture of Malacañang as it looks from the riverbanks. It’s not something you see every day! Also, there are whispers of snipers keeping watch so you may want to behave.

Here’s somewhere you can bring your S.O.—or at least point it out from the ferry. The Pasig River ferry currently services a total of 11 stations, including the Lambingan Station in Manila. Each one is equipped with a restroom and WiFi connection, according to the Metropolitan Manila Development Authority, so your wait won’t be terrible. Or you know, you could just cuddle it out.

Works of art along the riverbank

All the way down from Mandaluyong to San Juan, the banks of the Pasig river have been adorned with cool pieces. You can spot everything from inspirational sayings to awesome abstract ones. The pumping stations of the Metropolitan Manila Development Authority along the river have also been painted over with bright colors and illustrations, including those of alligators and tamaraws.

Legend of Manda and Luyong

A little past the Hulo Station in Mandaluyong City, you’ll see a story painted on the river’s banks. You can spot the folk legend of Manda and Luyong, said to be lovers from the olden times, who settled in the area. This story is just one of the many origin tales for the city’s name, but it’s arguably the most romantic—and therefore a cool read as you glide past.

“Listen, look, and listen, and learn!” as that 2019 viral video went. You can’t deny the little thrill you get when the Philippine National Railway zooms noisily past you as you’re on stopped on the road, so imagine it going above you while you’re on water. The Philippine National Railway isn't known for having the prettiest trains, but they're almost cinematic as they pass over the river.

Another train line you can spot along the Pasig River is the Light Rail Transit Line 1 (LRT-1). The tracks pass right between the Quezon Memorial and MacArthur bridges near the transport hub of Lawton in Manila. If you’ve ever been a student shuttling back and forth on the LRT-1 then this is sure to offer some nostalgia hits—but this time, from the river!

Go people-watching along the river

If the people on board the ferry with you aren’t interesting enough, then the people outside it are sure to be. There are a lot of residential hubs along the river—from posh condos to makeshift homes and even the Sta. Ana tenement in Manila. You might even catch a couple kids crossing over the water pipes—not recommended, but part of their lives.

Call us sentimental but wide open spaces are hard to come by in the Metro. If the wild side of you is missing seeing a huge expanse of sky past all the skyscrapers, then the ferry gives you the chance. Plus, if you time it right, you might enter the city of Manila just as the famed sunset lights everything up with in bright reds and golds.

If you haven’t made time to check out this historic bridge’s new look, then allow us to say that you really have to—whether you’re into the new lamp posts' design or not. Jones Bridge is right next to Escolta Station in Manila, and seeing as it’s the end terminal then you have no choice but to get off and enjoy the sights. We suggest going late in the day just as the lights are turned on for the full experience.

Hit two birds with one stone when you make it to Escolta Station as the imposing Postal Office sits right across it, too. It’s been featured on every post card, but seeing it IRL just gives it a whole new meaning. The National Museum has already declared it an “important cultural property” and seeing the opposite side of this Neo-classical building completes the Manila experience.

Adventurer Savvy Seasoned Pasig River Ferry Manila Mandaluyong City City Life
Your Guide to Thriving in This Strange New World
Staying
In? What to watch, what to eat, and where to shop from home
OR
Heading
Out? What you need to know to stay safe when heading out