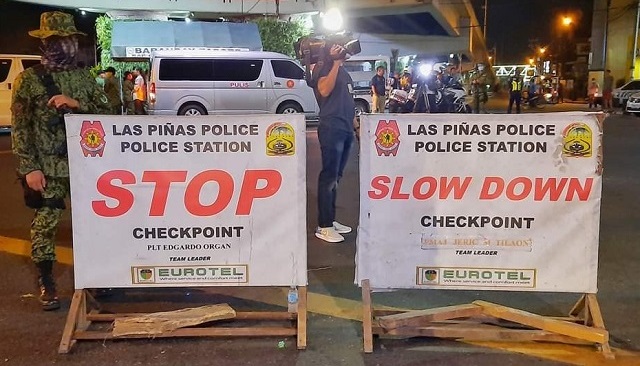 Checkpoint Check: What They're Like, What They Can and Can't Do

Plus, a list of where the checkpoints will be.

(SPOT.ph) The first day of the Metro Manila "community quarantine" has officially begun. Checkpoints (a.k.a. "police visibility operations") have been put in place along the Metro's borders to prevent the spread of COVID-19; around 20,000 members of the Philippine National Police have been deployed, along with uniformed personnel from the Philippine Armed Forces.

The number of people moving in and out of the National Capital Region are being limited to health workers, authorized government workers, and those heading to their place of work, among others. After a rather confusing two days since President Rodrigo Duterte's announcement and authorities ironing out how the month-long quarantine period will work, it seems this is what the checkpoints will officially be like.

What Happens at the Checkpoints

Motorists passing through the checkpoints will be subjected to a check for signs and symptoms of COVID-19 by personnel in fatigues and protective gear such as face masks and gloves. You will also be asked to show proof of employment or necessary business inside Metro Manila to get in. Those in buses and other public utility vehicles should be practicing social distancing by seating apart, according to the latest rules given by the Philippine National Police to the local government of Muntinlupa City.

This means that you can expect quite the build-up at the Metro's borders. No word yet on just how bad the traffic can get, though commuters taking buses will be inspected at the pick-up points, clarified Debold Sinas, chief of the National Capital Region (NCR) Police Office. Ideally, this will help the traffic flow.

While it isn't illegal to be sick, violators of community quarantine guidelines will supposedly be arrested, said Sinas earlier on March 13. "This is a global emergency so bawal ang pasaway," said Senator Bato dela Rosa in defense of this decision. "Arrest? Yes. Detention? No. After arrest send them back home,"said the senator. Note, though, the Department of Justice has clarified that people simply trying to get in and out of the Metro can't be arrested.

A "warrantless arrest" can only be carried out if "the person assaults the law enforcement agents, or slanders him, or bribes him," clarified Department of Justice Secretary Menardo Guevarra.

Where the Checkpoints Are Located

There will be no physical barriers along the Metro's boundaries, for a "softer approach" to the checkpoints, according to an ABS-CBN report. There will be signages though, and the presence of uniformed personnel should be a dead giveaway.

Check out the locations as specified by the National Capital Region Police Office below:

Adventurer Savvy Seasoned Metro Manila Covid-19 Philippine National Police Philippine Armed Forces Covid-19 News
Your Guide to Thriving in This Strange New World
Staying
In? What to watch, what to eat, and where to shop from home
OR
Heading
Out? What you need to know to stay safe when heading out