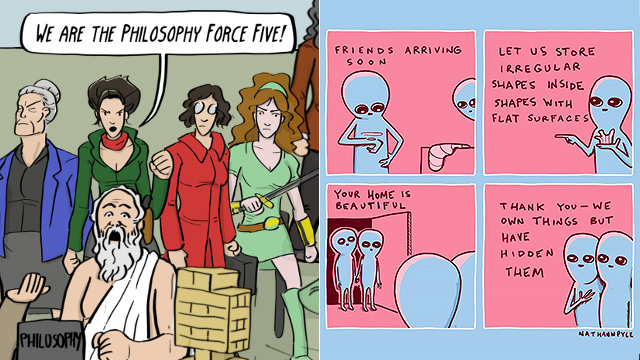 Need a Laugh? Check Out These 10 Hilarious Webcomics

Prepare to click away in the next few hours.

(SPOT.ph) We're sure it wouldn't be far-fetched to say that your bookshelves are bursting, and while there's always going to be joy in burying your nose in the pages of a good read, the Internet has opened up plenty of other options for relishing the written word. One of them would be webcomics. We’re sure you’ve seen lots of popular strips going around online, but if you want to know where they come from—and more importantly, how you can keep up with the latest ones, we round up a couple of fun webcomics for you to dip your toes in.

These comics don’t follow a specific storyline so you can just come back and read a couple when you’re bored, or spend hours just going through their archives—we don’t judge (We’ve done it ourselves).

Also read:
10 Filipina Illustrators to Follow to Brighten Up Your IG Feed
10 Pinoy Comic Artists That Will Add Some Fun to Your IG Feed

Check out these 10 funny webcomics to lighten up your day:

Remember that “annoyed bird” meme? Well, the original comic strip came from False Knees. Behind the very pleasing and realistic drawings of birds—and other animals—behaving all human-like is comic artist Joshua Barkman. False Knees can sometimes be very quiet (just a simple ink on paper kind of panel strip), a little thought-provoking (a tad morbid at times), but somehow, there’s always something funny about animals acting like silly, silly humans. Plus, the watercolor-like illustrations of wildlife are definitely nothing to complain about. You can also watch for sketches of different kinds of animals by the creator!

If you’ve ever wanted to be weirded out by human beings—we mean, even more than usual—then look no further than Nathan Pyle’s Strange Planet webcomics. The four-panel comic strip format is everywhere online, but Pyle’s series in particular just exploded thanks to its funny and sometimes heartwarming take on supposedly normal human activities. Check out the alien-like characters' take on some of the human race’s most banal routines—as they turn it into something hilariously foreign.

xkcd has been around since 2006 and is probably one of the first webcomics to gain real ground. It’s created by Randall Munroe, who used to work on NASA robots. xkcd is updated pretty much daily and there’s really no telling what you might get (the name itself is a random bunch of letters). Behind the clean lines and nameless stick figures, the strip can revolve around something as general as playing a clever prank on someone, to overly detailed guides that perfectly visualize huge concepts, weirdly entertaining graphs, and some pretty unique stuff (Munroe created a single panel that you can click and drag to explore an entire virtual world).

Everyone’s a mess sometimes and Sarah’s Scribbles are a celebration of just how wonderfully wacky people can get—especially when it comes to cats and other adorable creatures. These black-and-white comics by Sarah Andersen are a funny and honest look at life. You can check out the webcomics for some absurdly hilarious comic strips—or check out her other series, like Fangs, which is a romantic comedy about a werewolf and a vampire dating.

This comic gets plus points for being extra-relatable—the strips’ main character getting beaten up by existential-slash-conceptual threats that don’t actually “exist” just hits way too close to home every time. It used to be known as Owl Turd; the original series gave birth to several meme trends based on original strips (i.e. “missed the point,” “all life is precious”). But after creator Shenanigansen went on a short hiatus in late 2017, the creator came back and continued the comic as Shen Comix.

Better known as SMBC, these comics recreate the same fun feeling of munching on breakfast in front of the TV every Saturday morning of your childhood—but with a tad more educational value (sometimes maybe less). First published in 2002, creator Zach Weiner posts almost daily on his website comics about everything and anything from science, philosophy, research, romance and more. There isn’t much of a recurring story here either, but sometimes the geeky content follows certain themes—just enough to get you thinking.

Created by Dami Lee—who is also a writer for The Verge—As Per Usual is a fun, slice-of-life read. The webcomics feature a “cartoonist lady person” (who we assume is based on Lee herself) as she struggles, stumbles, and sometimes succeeds in life. The humor is sometimes random but always hilariously full of Lee’s own observations, experiences, and thoughts; usually capturing the same somewhat weird stuff we’re sure you think about, too, sometimes.

With fun colors and wonky drawings, Extra Fabulous Comics certainly lives up to its name—as long as you kind of squint a bit when you think of the original meaning of the word “fabulous.” Behind it is ZMS (First name "Zach") who's been making comics since 2011. The strip is popular for its pun-slash-pain-ful wordplay, totally random and unexpected twists and adult content (the funny, bad-mouthed kind). It’s more ridiculous than fabulous, TBH, and we mean that in the best way possible.

If you’re in a relationship then you’ll be happy to see little slices of your life in these strips—if you’re single, then, well, you can bookmark them for when you can reenact them with that special someone! Catana Chetwynd has channeled all kinds of adorable energy into her simple comics. The cutesy antics were, of course, inspired by real-life interactions with her boyfriend-now-fiance John Freed. Feel free to read them when you’re in need of a pick-me-up!

You may want to sit down for this one: Existential Comics takes (mostly Western) history’s biggest brains and puts them into ridiculous, modern situations. These comics are a little longer than others on this list, but when you’ve got Jean Paul Sartre and Simone de Beauvoir arguing over a game of Battleship, we would also appreciate a bit more context. The series is created by Corey Mohler—who happens to have about zero academic background in philosophy. It’s somehow funny whether or not you understood your college readings, and the accompanying explanations and links on the official website make learning feel so much easier.

Adventurer Savvy Seasoned Webcomics Reads False Knees Strange Planet Xkcd Sarah's Scribbles Shen Comix Saturday Morning Breakfast Cereal As Per Usual Extra Fabulous Comics Catana Comics Existential Comics Evergreen Free Things To Do
Your Guide to Thriving in This Strange New World
Staying
In? What to watch, what to eat, and where to shop from home
OR
Heading
Out? What you need to know to stay safe when heading out