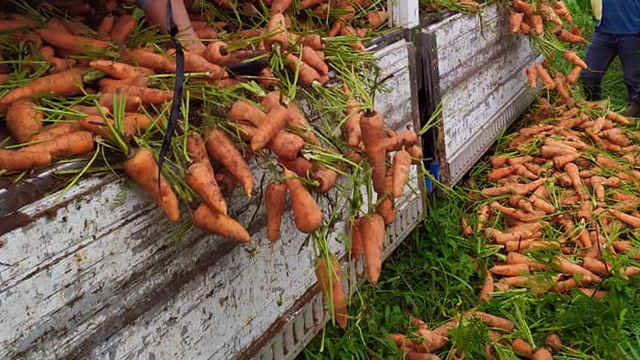 The Quarantine Is Pushing Ifugao Farmers to Throw Away Their Harvest

Lack of buyers and the halt of transportation have hit our farmers hard.

(SPOT.ph) Early this week, 23-year-old Ifugao farmer Jaren Catama Lamhi threw away a truckload's worth of his crops—around 3,500 to 3,700 kilograms of carrots—after he was unable to sell them at both the Nueva Vizcaya Agricultural Terminal Inc. and the La Trinidad Vegetable Trading Post, he tells SPOT.ph in an online conversation. Wholesale prices for vegetables at these tradings posts have been low since early 2020, but it seems the quarantine implemented over the entire Luzon has pushed farmers to new limits.

Prices for vegetables in Cordillera have been steadily dropping, according to Benguet Farmers Marketing Cooperative head Agot Balanoy in a report by the Philippine News Agency. "The first quarter of the year is a very difficult time in selling highland vegetables at the trading post due to low demand," Balonoy added.

Adding to this are all the cancelled festivities in Baguio City—including the annual Panagbenga—and surrounding regions, further decreasing the demand that tourism usually hikes up at this time of the year. "There are no calamities and there is nothing to disturb the production," added Balanoy, meaning that farmers continue to grow all these vegetables with no sure buyers.

There are around 130,000 farmers in Benguet alone, noted Balonoy in the same report. Not included in that number are farmers from the neighboring areas of Ifugao and the Mountain Province.

The Problem of Transportation

Transporting produce appears to be adding to the problem as well. While farmers could simply give away their crop instead of throwing it away, getting it to the people who could make use of it is another issue. The enhanced community quarantine has greatly limited movement for the sake of containing the COVID-19 disease.

Food and other agricultural products are expected to be able to pass through checkpoints, under the Department of Agriculture's "food resiliency protocol." Vehicles transporting these goods must first be issued stickers by the government to use the designated "food lanes."

Local government could help Cordillera's farmers by buying their crops and distributing them to households, said Melyn Apilis in an ABS-CBN News report. Authorities elsewhere have also taken this route. Cabuyao City in Laguna have initiated the Harvest on the Go project, where produce bought from local farmers will be distributed as relief goods to households.

Several groups have also started their own projects to help farmers move produce amidst the quarantine. Bagsakan Farmers Market is a Facebook shop that helps deliver vegetables from farmers in Bulacan to areas in Quezon City, while social enterprise Agrea is also helping farmers transport and sell their harvest through their Move Food initiative.

As more reports of vegetables going to waste surface, the Department of Agriculture is looking at sending trucks to haul vegetables from agricultural provinces, according to an ABS-CBN News report on March 27. The harvest will be sold in Metro Manila.

Adventurer Savvy Seasoned Regional Covid-19 Farmers New Normal Opinions
Your Guide to Thriving in This Strange New World
Staying
In? What to watch, what to eat, and where to shop from home
OR
Heading
Out? What you need to know to stay safe when heading out