A Look at Past Outbreaks and How Long They Took to Contain
Loading
Already a member? Log in
No account yet? Create Account
Spot.ph is your one-stop urban lifestyle guide to the best of Manila. 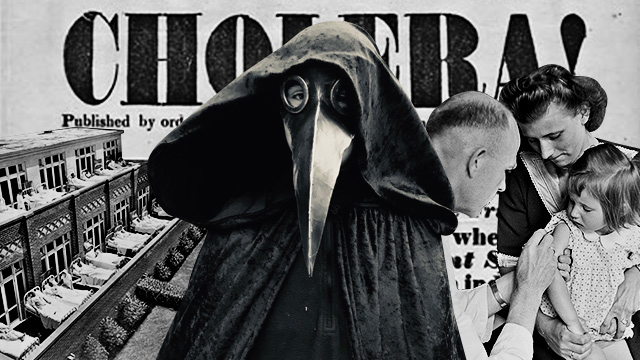 How We Dealt With Some of the Worst Outbreaks in History

Take a look at some of the outbreaks that made a mark in human history.

(SPOT.ph) Nobody ever thinks they would be alive during a history-changing event—least of all a pandemic that has spread to nearly all of the world’s nations and claimed the lives of thousands. COVID-19 has changed the world as we know it. No one can say for sure when, or if, things will ever go back to the way they were, but we can take a look at the past and see how people dealt with diseases throughout history—many of which the world's scientists were able to contain.

Aside from the fast-spreading COVID-19, there are still a few diseases that have no cure, no vaccine, or are yet to be eradicated—around 37.9 million people have HIV/AIDS as of 2018 data, for example. Despite the grim statistics, numbers show that we have been able to reduce the number of fatalities as each outbreak passes; read up on the history below.

This is how the world dealt with some of the worst outbreaks in history:

The earliest known record of leprosy was found on an Egyptian Papyrus document dating back to 1550 B.C. Individuals infected with this disease suffered stigma throughout history: aside from the skin lesions caused by the disease, it was thought to be a hereditary illness that served as punishment for sin. The disease infected so many people that an estimated 19,000 leprosaria existed in Medieval Europe. Leprosy centers, where patients were cared for in isolation from the rest of the community, contributed to the decline of leprosy cases in 16th-century Europe.

It wasn’t until 1873 that Dr. Gerhard Henrik Armauer Hansen of Norway identified the germ which causes leprosy: Mycobacterium leprae. Leprosy is also known as Hansen’s Disease. And it wasn’t until centuries later, in the 1950s, that several drugs were proven to effectively cure the disease. Currently, a multi-drug therapy—a combination of three drugs: dapsone, rifampicin, and clofazimine—is the World Health Organization’s recommended method of cure. Around a hundred thousand cases are still reported annually, but the World Health Organization is aiming for a leprosy-free world by 2020.

Otherwise known as the Black Death, this plague swept through Europe and Asia in the 14th century—effectively decreasing the European continent’s entire population by a third. The gruesome sickness caused huge boils oozing blood and pus on people’s skin. Stories of how fast people died—and most importantly the images preserved from this time—can still send chills down your spine today.

French biologist Alexandre Yersin was responsible for discovering the plague-causing germ Yersina pestis at the end of the 19th century. This bacillus is now known to have been airborne and transmitted as well through fleas and rats. Although it died down—partially because of quarantines enforced in trading posts of medieval Europe—several iterations of the plague would break out and kill relatively large numbers throughout the next few centuries. Today, several thousand cases are still reported by the World Health Organization (WHO) annually, but the disease is curable with antibiotics as long as it is diagnosed early.

Smallpox is known as one of the deadliest diseases in history—it is said to have led to the demise of the Aztec empire and was even used as one of the first forms of biological warfare against Native Americans by the British during their takeover of the “New World.” An estimated 56 million people died of smallpox during the said settlement of North America in the 16th century. Smallpox was also the first disease to get a vaccine.

Before the development of the first-ever vaccine, smallpox was prevented through the process of inoculation, a.k.a. variolation, named after the variola virus that causes it. The tale goes that a Buddhist nun in Ancient China is said to have grinded up bits of dried smallpox sores and blown it into nostrils of healthy people to build up immunity to the disease. In line with this logic, English doctor Edward Jenner developed the vaccine using material from the less virile cowpox disease. Eventually, more vaccines were developed, leading to a total global eradication of the disease on May 8, 1980, as declared by the WHO.

Cholera is an ongoing problem as some people around the world do not have access to proper sanitation and clean water. The first major pandemic happened in the 19th century when the diarrhea-causing bacterium Vibrio cholera spread from the Ganges Delta in India. Six waves of pandemics followed with the death toll estimated to be at more than a million. The seventh wave started in 1961 and is still ongoing, according to the WHO.

While there are already approved oral vaccines and cholera is itself easily treatable, instances of the disease continue to persist because of humanitarian crises. Several populations are still forced to live below proper sanitary standards, making them susceptible to the disease. Data shows that up to 143,000 people die due to cholera annually. WHO is leading an initiative to reduce the death toll by 90% in 2030.

Caused by Mycobacterium tuberculosis, this disease has arguably been around for as long as there have been humans. It has gone by many names: “phthisis” in ancient Greece, “tabes” in ancient Rome, and “schachepheth” in ancient Hebrew. It was also referred to as the “White Plague” in the 17th century due to the resulting paleness of a victim and was more commonly known as consumption; “tuberculosis” was coined by German physician Johann Lukas Schönlein in 1834.

It is believed that tuberculosis (TB) caused a quarter of Europe’s total deaths from the 1600s to the 1800s. Proper identification and treatment has led to the disease being curable and preventable. Around a quarter of the world’s population has a latent form of TB, which may or may not manifest. It is still cited as one of the leading causes of death, according to the WHO, although incident rates are now falling at around 2% annually.

The influenza pandemic of 1918 is cited as one of the deadliest pandemics in recent history. In the span of three years, the influenza claimed the lives of around 40 to 50 million people worldwide. It came to be known as the “Spanish flu” when only Spanish journalists reported about the pandemic during World War I;  a press ban was enforced in France, England, and the U.S. The virulent spread is mostly blamed upon the lack of action from authorities, who believed the outbreak was only a seasonal flu. Plus, a quarantine or civilian lockdown would have been a blow to the ongoing war efforts, something officials were unwilling to do.

Several cities relied on social interventions to keep the influenza strain away, much the same way we are now flattening the curve of COVID-19 spread today. Public gatherings were disallowed, people had to wear gauze masks, and there were fines for those who ignored such ordinances. The pandemic eventually died down by 1919. Nearly a century later in 2008, scientists were able to study the particular H1N1 virus behind the flu strain and found what made it so deadly: it weakened a patient’s bronchial tubes and lungs, allowing for bacterial pneumonia to set in.

This debilitating disease reappeared in the Philippines in September 2019, nearly two decades after the country was declared polio-free in 2000. Records from Ancient Egypt show that the poliovirus has been around for a long, long time, but more serious and sporadic outbreaks only came about at the turn of the 20th century—fueled by growing cities after the industrial age. One epidemic in the U.S. left 6,000 dead and 27,000 paralyzed in 1916; children accounted for a large chunk of the disease’s victims.

It wasn’t until 1952 that the first effective vaccine for this disease was developed by Dr. Jonas Salk. Immediate mass vaccination in the U.S. brought polio cases down from 35,000 in 1953 to 5,300 in 1957. The next few decades saw the WHO working to eradicate this incurable disease through vaccination; in 1988, 125 countries reported polio cases, by 2015, only two countries, Pakistan and Afghanistan, had polio cases.

A different strain of the H1N1 influenza virus appeared in 2009. More commonly referred to as swine flu, this disease is said to be caused by a virus similar to one that infects pigs, hence the name. This specific strain first appeared in Mexico in April 2009, and by June of the same year, it had spread to 74 countries—prompting WHO to label it a pandemic. The WHO was widely criticized for labeling it as such, with experts saying that the term caused more panic than necessary.

Around 16,000 people died from swine flu in the span of a year with a rough estimate of 43 to 89 million cases worldwide. WHO declared the pandemic over in August 2010 but several outbreaks have been recorded sporadically since; 774 deaths were recorded during an outbreak of a mutant strain of H1N1 in India in 2015.

Viral strains from the coronavirus family have caused two other outbreaks before COVID-19. SARS, or Severe Acute Respiratory Syndrome, was first reported in people in the Guangdong province of Southern China in 2002. This respiratory illness—similar in symptoms to influenza—eventually spread to 26 countries with 8,000 reported cases worldwide before it was contained in 2003. A total of 774 deaths were reported.

SARS has been labeled by some experts as the “first pandemic of the 21st century” as the disease spread swiftly across the globe with a relatively high mortality rate of 10%. This strain of coronavirus was followed in 2012 by the slower moving MERS-CoV virus, which caused MERS, or Middle East Respiratory Syndrome. Around 2,519 cases have been reported so far, with outbreaks reported in Saudi Arabia and in 2015, South Korea.

The Ebola virus was first discovered in 1976 and is named after the Ebola River in the Democratic Republic of Congo, as the first outbreak occurred in a village nearby. The sickness, formally called the Ebola hemorrhagic fever, is often deadly with an average case fatality rate of 50%; though the WHO notes that different outbreaks have recorded varying rates. The virus is easily transmitted through contact with bodily fluids from an infected person, which raises the risks for health workers caring for Ebola patients.

Several outbreaks have been recorded since 1976—but none as deadly as the 2014 to 2016 one in West Africa. A total of 11,315 people died, with 28,637 cases reported across six countries. Another outbreak in Congo occurred in 2018. So far, an experimental vaccine has been developed and is currently in use, according to the WHO.

Adventurer Savvy Seasoned Science History World Health Organization Who Covid-19 Tpc-000001 Evergreen New Normal Opinions
Your Guide to Thriving in This Strange New World
Staying
In? What to watch, what to eat, and where to shop from home
OR
Heading
Out? What you need to know to stay safe when heading out