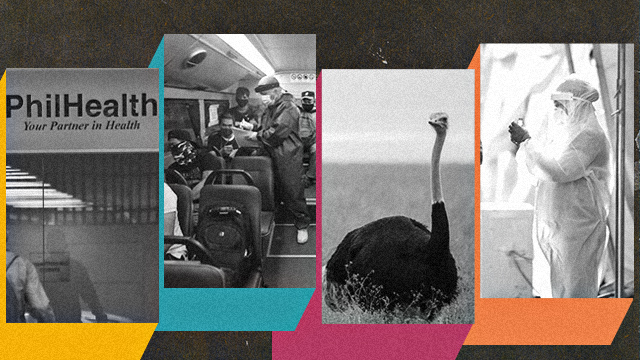 (SPOT.ph) It has been one heck of a Tuesday. We round up some of the biggest news that happened today—best be sitting down for this, Spotters!

Executives heading the Philippine Health Insurance Corporation—our government-funded national healthcare program—have supposedly made off with P15 billion worth of taxpayers' money, according to former anti-fraud legal officer Thorrsson Montes Keith, (a.k.a. the guy who gave us an epic resignation letter earlier in July). Meanwhile, the agency's officials stated that the national healthcare system is set to collapse by 2022 if the COVID-19 pandemic continues due to lack of funds.

A record-breaking 6,352 new cases has been reported by the Department of Health today, hiking the country's total COVID-19 cases to 112,593. Of this number, 1,826 come from the National Capital Region. Total recoveries are now up to 66,049 with 240 recovered patients recorded today. Total deaths, on the other hand, are now at 2,115 with 11 added to the tally today.

Folks online pretty much freaked out when news broke that there were ostriches running freely in a Quezon City residential area. The pair ran around for a bit, gifting us with some pretty funny videos and prime meme content, before being captured by authorities. Ostrich 1 and Ostrich 2 are reportedly owned by one of the nearby homeowners and are in an okay state. There's no clarification yet as to why anyone in Metro Manila would own any of these large animals.

A lot of changes were implemented as the capital region reentered a modified enhanced community quarantine on August 4—the government's response to a distress call by frontliners. Checkpoints were back in place, quarantine passes required, and pillion riding disallowed again, with an exception for frontliners. Local government units also declared their own rules on whether tricycles will be allowed to operate or not.

Task Force Disiplina chief and former city councilor Rannie Ludovica explained that his post was merely to express his "dismay" with the return to modified ECQ as COVID-19 cases continue to rise. He also called out news network Rappler for allegedly spreading “malicious information” about the said social media post. Quezon City Mayor Joy Belmonte has condemned Ludovica's threat, saying "Ito po ay mali, it is inappropriate, it is irresponsible."

Palace says there's no reason to ban TikTok in the Philippines

Adventurer Savvy Seasoned Philhealth Quezon City Ostrich Quarantine News Roundup
Your Guide to Thriving in This Strange New World
Staying
In? What to watch, what to eat, and where to shop from home
OR
Heading
Out? What you need to know to stay safe when heading out