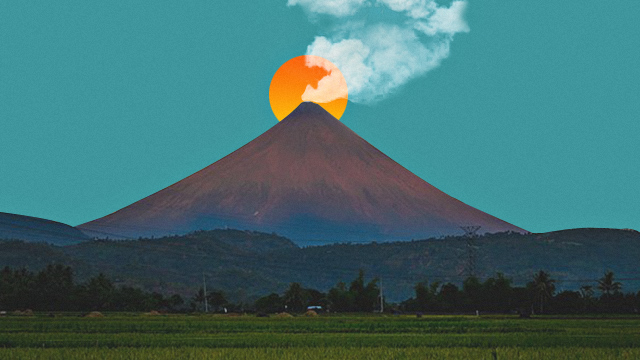 Four PH Volcanoes Are on Alert Level 1; Here's What That Means

Our volcanoes have been letting out some steam recently. Can relate.

(SPOT.ph) Looks like 2020 isn't done unloading its shit just yet. The Philippine Institute of Volcanology and Seismology reported in the morning of August 18 that four volcanoes are at Alert Level 1—with a magnitude 6.5 earthquake shaking up Masbate Island at around 8 a.m. of the same day. All the strange activity has Twitter abuzz but before you start worrying, you should note that the four volcanoes, Taal, Mayon, Kanlaon, and, Bulusan, have been under Alert Level 1 for some time now. We list down all the details you need to know from the Philippine Institute of Volcanology and Seismology (PHIVOLCS).

The picturesque Taal Volcano was spotted releasing steam in the morning of August 18. "Fumarolic activity," a.k.a. weak steaming, from the main crater reached up to 20 meters high before drifting off, according to the PHIVOLCS bulletin at 8 a.m. Five volcanic earthquakes were also recorded since 8 a.m. the previous day.

Taal Volcano remains at Alert Level 1, said PHIVOLCS. It was lowered to this alert level on March 19 after several weeks of severe unrest starting January—yup, that was just this year.

Over in the Bicol region, the Mayon Volcano was also recorded emitting steam-laden plumes that rose up to 750 meters high, said PHIVOLCS in their bulletin. A single "rockfall event" happened during the 24-hour observation period while newly collected data "indicated non-steady inflation of the middle to upper edifice that began in late 2019." This means that the volcano does appear to be active but not quite at an alarming rate.

The institute "would like to remind the public that Mayon Volcano is at Alert Level 1, which means that it is at an abnormal condition." While it is unlikely that we'll be seeing lava in the area anytime soon, PHIVOLCS stated that it is best to stay outside of the six-kilometer radius Permanent Danger Zone around the volcano.

On Negros Island, steam was also seen rising from the Kanlaon Volcano at up to 500 meters high. Four volcanic earthquakes were recorded within a 24-hour period while the slopes were observed to be inflating. According to the bulletin, these parameters may signal movement within the volcano.

PHIVOLCS reminded the public again that Kanlaon is currently at Alert Level 1, meaning that it "has entered a period of unrest." They pushed for the four-kilometer danger zone around the volcano to be made strictly off-limits.

No volcanic earthquakes were recorded during the 24-hour period in Mount Bulusan, Sorsogon. Weak steam emissions from a lower vent and some ground deformation was observed. PHIVOLCS noted that this may mean "volcanic processes" are happening underneath the volcano.

Alert Level 1 "prevails" over Bulusan, stated the PHIVOLCS bulletin and people are reminded to stay out of the four-kilometed danger zone.

Adventurer Savvy Seasoned Taal Bulusan Kanlaon Mayon Phivolcs Philippine Institute Of Volcanology And Seismology Hard News
Your Guide to Thriving in This Strange New World
Staying
In? What to watch, what to eat, and where to shop from home
OR
Heading
Out? What you need to know to stay safe when heading out