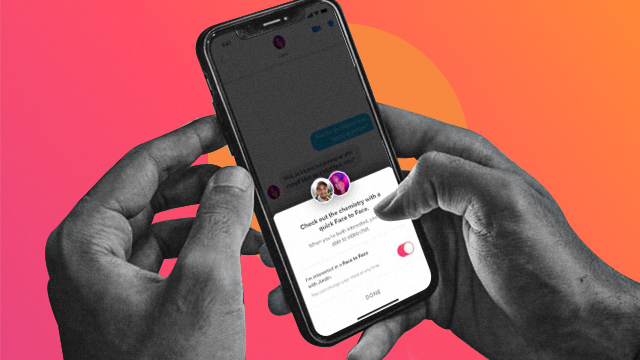 Attention, Singles Under Quarantine: You Can Finally Find Out If You’re Being Catfished

On Tinder, at least.

(SPOT.ph) Dating reached a whole new level of tricky in the past few months. If you find yourself constantly swiping left (or more often than not, right) on Tinder searching for some form of romantic human connection, then you may want to take note: the dating app is rolling out their in-app video call feature Face to Face globally! So while you may want to think twice about physically meeting up with a match under the Metro Manila-wide quarantine—don't, no matter what your hormones say—this video-call feature is finally here to save the day.

Tinder tested the feature in a few countries earlier in July; they began rolling it out globally on October 27. And because dating in the digital era is extra complicated, they've put in several ways to make these one-to-one video calls as safe as possible (i.e. non-toxic).

You can only enable the Face to Face feature if you've matched with the other person—and more importantly, you both have to opt into the feature via a toggle. No worries though as the app won't notify the person you're chatting with that you've enabled Face to Face on your side until they do, eliminating the seen-zoned feels.

Aside from controlling the feature when you're chatting with a specific person, you can also disable the feature in general anytime on the app. Tinder also set up some ground rules for the video call, which will be flashed on your screens once both of have unlocked the feature. Plus, you can send a report to their team at any point after the call ends.

We know this may sound like another, more efficient way to get unsolicited dick pics but damn, we do have some hope for humanity left. Who knows, a quick video chat might just be the basis of an actual, healthy relationship. Fingers crossed!