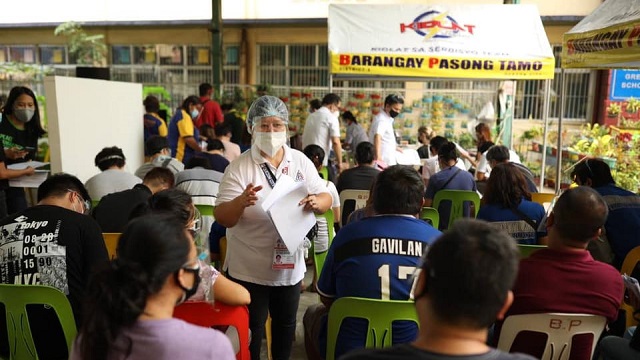 We talk to folks from Marikina, Quezon City, and Taguig.

(SPOT.ph) The Philippines’ first official COVID-19 vaccine recipient, Philippine General Hospital Director Gerardo “Gap” Legaspi, received a jab on March 1. Since then, thousands of our medical frontliners have finally been inoculated and, in several Metro Manila cities, the vaccination program now includes several others on the top of the Department of Health’s priority list. We’re sure you’ve seen those pictures on your feed of folks sharing that they have gotten their much-awaited first dose—amid all the other anxiety-inducing headlines and information overload, we totally understand if you feel a slight twinge of envy.

Whether you’re (im)patiently waiting for your turn, are still trying to figure out the proper way to get on your local government unit’s waiting list, or simply want to know as much as you can about the vaccine before getting it, we gathered some first-hand information about the process. We talked to three non-medical frontliners from Quezon City, Marikina, and Taguig—cities that have begun vaccinating senior citizens and those with comorbidities under priority category A2 and A3—about their experiences.

Also Read:
Nayong Pilipino Soon to Open as a Mega Vaccination Site
How to Pre-Register for Your LGU’s Vaccination Program

Check out what it's really like to get a COVID-19 vaccine from your LGU in Metro Manila:

Taguig City’s vaccination process is tied in with Traze, their contact-tracing platform. Residents must use their specific QR code to get on the waiting list and then wait for instructions from authorities—but be sure to keep eyes and ears open for any developments.

Ara Rodriguez, 35, got her vaccine on April 3. “The property management of the condo where I live messaged us that Taguig is starting to give out injections to those with comorbidities, so what I did was I walked in,” she tells SPOT.ph. She did register through the Traze app in January and applied for the vaccine there as well, she added. “The thing with Taguig is they tell us to wait for our schedule.” But when she heard that authorities had already begun vaccinating those with comorbidities, she and her aunt decided to head to one of the centers at a Vista Mall parking lot. “We went there, we just presented an I.D. with our address and the Traze QR Code and they accommodated us.”

“It just took me three hours,” says Rodriguez of the whole vaccination process itself. There were lines for checking their documents, a blood-pressure check, and even an interview to see if you are “psychologically [and] emotionally ready for your injection because I think people are hesitant [with] all the news and supposed side effects.” The actual injection itself does not take long and then there’s a half-hour monitoring period after, she says, and then she was allowed to walk free with a card certifying her first dose and a reminder to come back on May 3 for the second.

She received a Sinovac vaccine. “It is better to be vaccinated than not at all,” she says. Side effects were at a minimum; she was told by the doctor at the vaccination center to drink paracetamol once she got home, which she feels helped keep the effects at a minimal slight fever the next morning.

“I’m happy because I got injected,” says Rodriguez, who says she is more at peace after getting her first dose. But she also worries about the others in her city who may not have the same experience as her. “I’m lucky I live inside a compound where the property manager is active and keeps us up to date,” she says. “I believe there are a lot of senior citizens who may not be getting the info needed. It becomes a kind of ‘chosen priority’ in a way.”

Online registration for an appointment—with separate forms for A2 and A3 categories—were opened by Marikina government on April 9, with a reminder that walk-ins won’t be accepted starting April 12.

Renzo Rodriguez, who falls under the A3 category, was accepted when he and his mother walked in to the ongoing vaccinations at the Marikina Sports Center on April 10. “Sa Marikina merong pumupunta from LGU to check kung kumusta, gano’n,” he tells SPOT.ph, although they learned through their subdivision’s group chat “na may available vaccine na for those under A3” the night before. They brought their medical certificate proving that they were under the A3 category.

They arrived at the center before 7 a.m. because they expected long lines “and 'yon nga, mahaba nga,” he jokes. Their papers were checked, then they went through a blood-pressure check, the vaccination itself, and then a 30-minute monitoring period for any immediate effects. It took them around four hours to go through the entire process. There were a lot of people at the center but Rodriguez says health protocols were still followed. Most importantly, no jumping-the-line was seen. After the jab, they were given a piece of paper marking their first dose and a reminder for the second.

Sinovac was the only available vaccine on that day, explains Renzo. “Mas okay na kaysa wala.” Side effects he felt were slight fever, grogginess, and aching in the joints when moving. “Pagkagising ko the following day, wala naman na.”

He spoke to a friend with a comorbidity while waiting in line for the vaccine; she was able to walk-in on the same day and get her first dose as well, he tells us.

He says the process to get a vaccine in Marikina was pretty satisfactory, especially “the fact na medyo hassle-free, kahit ang daming tao [sa center].” Rodriguez is still sticking to the same health protocols while waiting for the second dose—and will probably still take all the same precautions afterward.

Servillano “Dodo” Sta. Maria, a senior citizen living in Quezon City, tells us that he and his wife went to the vaccination center at the Diosdado Macapagal High School after they were told by friends that walk-ins were accepted there. “We did register, however getting the vaccine was by ‘accident,’ he shares. “Since we still couldn’t get an appointment, we just tried.”

They arrived at the vaccination center at 8:30 a.m. on April 10—and finally got vaccinated around 4 p.m. The lines were long, he says. “I guess they got wind of the center accepting walk-ins” so the place was packed. There were “watchers” and LGU representatives present to keep people in order, and although senior citizens were lined up with those under A3, “I appreciated them because they were very helpful. They were very solicitous; siguro nakita nila na matanda na ako so they would help me,” says Sta. Maria. Those who were on the older end of the senior citizen spectrum were helped to the front of the line by authorities, though Sta. Maria, being on the younger side, shared that he didn’t mind waiting it out.

“We were told that AstraZeneca was available so that was the form they gave us,” says Sta. Maria. But by the time they got to the end of the process—similar to the other cities—Sinovac was all that was left. “We waited six to seven hours; I didn’t want to try again, so I said ‘Go ahead and hit me with that Sinovac.’” Sta. Maria explains that he also felt a bit more confidence thanks to frontliner friends who were also given Sinovac.

Side effects were minimal for both Sta. Maria and his wife, he says. Aside from a slight fever the following day, which they simply slept off, they were back to normal soon enough. For now, Sta. Maria says that he knows to bring books and a charger for his second dose, and that he’s just happy to get a vaccine. “I’m more confident, but I won’t take things for granted either.” They will still follow the same precautions as before, he shares, but with a little less anxiety.

That wraps up the experience of three Metro Manila citizens who all pre-registered but ended up just walking in based on stuff they heard from fellow citizens—but this is just three out of hundreds of thousands who have gotten their first dose. The process, while not exactly hassle-free, is definitely worth going through.

Adventurer Savvy Hard News Quezon City Marikina Taguig Vaccination Covid-19 Longform
Your Guide to Thriving in This Strange New World
Staying
In? What to watch, what to eat, and where to shop from home
OR
Heading
Out? What you need to know to stay safe when heading out