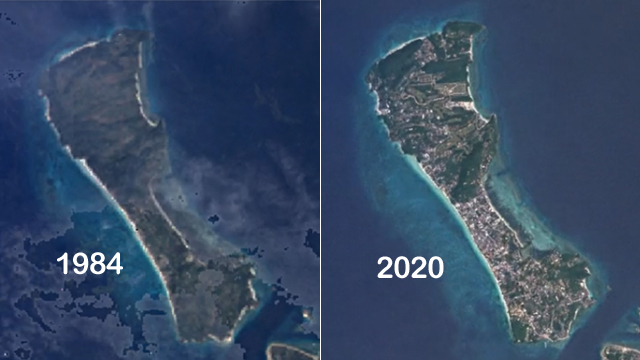 Check out the changes in the last decades.

(SPOT.ph) Boracay is one of the most popular getaway spots in the Philippines. Ask any foreigner or balikbayan where he or she would want to go and the answer would almost always be the small island off Aklan with white-sand beaches. And until the 2018 rehabilitation, the tropical getaway was also known for its crowded bars that were open until the wee hours of the morning. But when and how exactly did Boracay become so popular? Satellite photos from Google Earth's new Timelapse show a year-on-year change in how the island's once verdant surroundings and hilly terrain became golf resorts and rows of malls and resorts.

Boracay's original inhabitants are the indigenous communities of the Ati and Tumandok. In the 1940s and 1950s, the island relied largely on agriculture and fishing with locals enjoying the bounty of nature. By the 1970s, it became popular among families from mainland Panay. Thanks to two 1970 American films that were filmed on the island and a 1978 book by a German writer who dubbed it "paradise on Earth," Boracay became a popular budget destination for backpackers in the 1980s.

By the '90s, hotels and resorts started sprouting across the island, inviting more tourists from around the world. This continued well into the 2000s, as more people moved there to open tourist-centric businesses and take advantage of the tourism boost. Roads were widened and in-land forests were paved to make way for Boracay's so-called development and urbanization.

In 2018, after President Rodrigo Duterte called it a cesspool due to the island's lack of a proper sewage system, it went through a government-mandated six-month closure. Certain rules and regulations were put in place—including a more rigid process of getting on the island to control the influx of tourists and manage pollution. Resorts have also been ordered to remove their chairs and tables along the beach and maintain a safe distance from the waters. But along with this rehabilitation came another round of road widening, resulting in the demolition of homes and small local stores.

In March 2020, while the island was still recovering from the economic losses of 2018, the pandemic hit and forced most of the surviving stores to permanently close. They reopened in October 2020, only to be closed again to travelers from Metro Manila in March 2021 due to the surge of COVID-19 cases in the capital.

Boracay Google Earth Staying In Adventurer Savvy Seasoned Nostalgia
Your Guide to Thriving in This Strange New World
Staying
In? What to watch, what to eat, and where to shop from home
OR
Heading
Out? What you need to know to stay safe when heading out