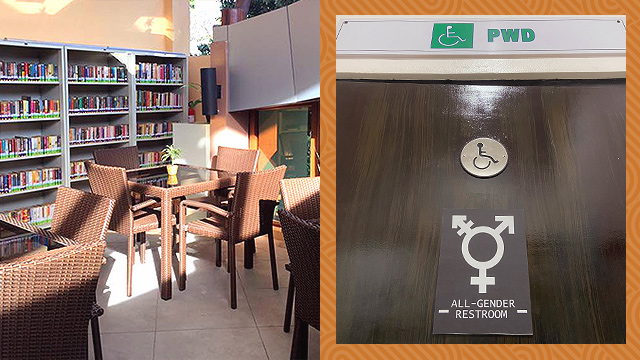 We all just need to pee without discrimination.

(SPOT.ph) For most cisgender binary people, using the public toilet is a non-issue. Cisgender women use the women's toilet, while cisgender men use the men's toilet. But on August 13, 2019, transgender woman (read: woman) named Gretchen Custodio Diez was arrested for lining up to use the women's restroom at Farmers Plaza Mall. This was just one of the many instances when LGBTQ+ people are discriminated against when using such public facilities. For others, there's the fear of being heckled in a men's restroom—for example—just because they dress differently. These kinds of situations prompt human rights advocates to push for gender neutral restrooms, especially in public spaces. And on June 8, Monday, the Quezon City Public Library opened an all-gender restroom on their first floor.

This is also aligned with Quezon City's Gender Fair Ordinance, which was established in 2014. The ordinance prohibits disrimination based on sexual orientation, gender identity and expression; and also mandates all establishments, including government, private, and commercial, to have all-gender toilets.

While some expressed gratitude about the opening of an all-gender restroom at QCPL, others are questioning the intention. Some of the comments are: "The LGBTQIA+ community are not persons with disabilities, being LGBTQIA+ is not a disability. But unfortunately, you have used the PWD restroom for LGBTQIA+ community;" and "How to lowkey discriminate/not to discriminate LGBTQ+, para nyong sinabing kapansanan ang pagiging LGBT a."

SPOT.ph reached out to an LGBTQ+ advocate regarding this criticism. "I don't think that was the intention naman. The important thing is that it comes from a place of love, respect and the effort to be inclusive. The access to a safe and discrimination-free washroom should be available to everyone—PWD, people of diverse SOGIE, young, old and to all those who just need to pee. And also it is the long-hanging fruit, the easiest way to be inclusive without breaking the bank," said Angel Romero, a human rights activist with special biases on women and LGBTQIA.

The Quezon City Public Library was awarded Third Place in the 2016 Outstanding Public Libraries by the National Library of the Philippines and the National Commission for Culture and the Arts in November 2016. In February 2017, they inaugurated a new two-storey building that features a fully automated system, from the Online Public Access Catalogue to an e-book facility. This allowed them to serve up to 1,000 clients a day from their original capacity of 500.

Lgbt News Hard News Adventurer Savvy Seasoned Quezon City Metro Manila Hyperlocal Government
Your Guide to Thriving in This Strange New World
Staying
In? What to watch, what to eat, and where to shop from home
OR
Heading
Out? What you need to know to stay safe when heading out