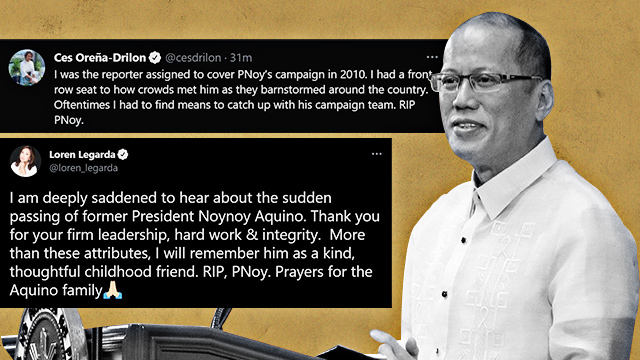 (SPOT.ph) News broke on Thursday morning, June 24, about the death of Former President Benigno "Noynoy" Aquino III. The Filipino politician served as a member of the House of Representatives from 1998 to 2007, a senator until 2010, then as the President of the Republic until 2016. "RIP Pnoy" immediately trended on Twitter as we see messages of condolence from friends, family, journalists, colleagues, and fellow public servants remembering the life he lived.

Here are some of the stories from people who got to know Noynoy Aquino:

Supreme Court Associate Justice Marvic M.V.F. Leonen expressed gratitude: "I have learned a lot from him. I saw him carry his title with dignity and integrity. It was an honor to have served with him. He will be missed."

Secretary of Foreign Affairs Teddy Boy Locsin posted a black-and-white photo of himself standing between former president Corazon Aquino, whose administration he served as the Press Secretary, and the younger Aquino.

Journalist Ces Oreña-Drilon recalled the time she covered Aquino's campaign trail in 2010. "I had a front row seat to how crowds met him as they barnstormed around the country," she said.

Filipino geologist, disaster scientist, and University of the Philippines professor Mahar Lagmay shared an anecdote about the time Aquino "pointed out to [them] that the units in [their] presentation was wrong." A mix-up in meters and centimeters was quickly spotted by the president.

Representative Loren Legarda, who served as senator alongside Aquino in the late 2000s, thanked the former president for his "firm leadership, hard work, and integrity." She also remembered him as a "kind, thoughtful childhood friend."

Economist JC Punongbayan, who served in the Aquino administration, said: "No leader is perfect, no leader will get it all right. But under PNoy's leadership there was decency, professionalism & a genuine desire to better the PH."

The daughter of Vice President Leni Robredo, Aika, reminded us of one of Aquino's famous lines: "Kayo ang boss ko."

Senator Sonny Angara, who was a colleague of Aquino at the House of Representatives from 2004 to 2007, revealed that the former president "played a major role in [his] entry into the Senate in the 2013 mid-term elections where [he] was part of the Team PNoy coalition. [Aquino] truly loved his country and helped so many Filipinos during his time in office."

Manila Mayor Isko Moreno posted a lengthy tweet about the former president: "PNoy was a pragmatic man who did the best with the cards that life had dealt him. He inspired us with his unexpected humility. May his legacy continue to lead others to the right path."

"Despite his shortcomings and mixed legacy for which there's an appropriate time to reckon with, P-Noy fought for national sovereignty, led with dignity, and empowered Filipinos to demand more from our public servants," physician and medical anthropologist Gideon Lasco tweeted.

Obituary Death Noynoy Ninoy Aquino Adventurer Savvy Seasoned Staying In Philippines Hard News
Your Guide to Thriving in This Strange New World
Staying
In? What to watch, what to eat, and where to shop from home
OR
Heading
Out? What you need to know to stay safe when heading out