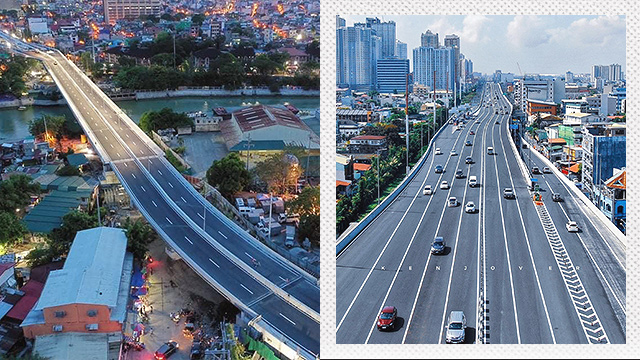 The Time to Stop Attaching Names to Government Projects Was Yesterday

Whose money are we using again?

Balancio replied with a clear answer on the many decades it took for the project to be fully realized. It was conceptualized way back in 1999, approved for funding in 2015, and finally completed in 2021, recounted the reporter.

Still, the super-subtle, possible shade expertly thrown by Sembrano was not missed by the Internet. One Twitter user posted the moment online, stating "Unbothered and feisty ate mo Bernadette Sembrano." The post has unsurprisingly gotten a lot of attention, with nearly 2,000 retweets and 500 quote tweets as of writing.

There is a lot to unpack here. (And we're not just talking about the current president announcing his intent to run for the vice-presidency at what is likely the first of many ribbon-cutting events in the coming months.) With the nearing election season has come a rise in well, feelings, for lack of a better term, and the undying practice of politicans attaching their names (or branding) everywhere is just one of them.

Take recent posts on Mark Villar's Facebook page. The Department of Public Works and Highway chief has more often than not touted infra projects under the Build, Build, Build slogan of the Duterte administration—but a recent post of the Skyway has gotten a different type of reaction.

If you want to be factual about it, both the Skyway and the LRT-2 East Extension first broke ground under the late President Benigno "Noynoy" Aquino III's administration. The Skyway connector between north and south of Metro Manila is a Public-Private Partnership project that started in 2014, under PNoy.

The sudden passing of Aquino on June 24 at just 61 years old caused a landslide of emotions, there's no doubt about that. But there is also no denying that the strange battle of crediting projects to certain politicians—as if these things aren't the bare minimum to be expected from our national leaders—has always been a deep-seated issue in the Philippines.

From waiting sheds literally reshaped to form letters to tarps with gigantic, smiling faces on them and more, politicans almost have a desperate need to be seen. And don't even get us started on the branded "merch" they give out. Air Binay, anyone?

There has always been pushback on this practice. The aptly dubbed "Anti-Epal" bill has been filed and refiled in Congress. Ordinary citizens are also sick of the practice. Just take a look at the 45,000 strong Anti-Epal Facebook group that keeps track of ka-epalan across the country—and that, erm, impressively large mural unveiled in Bulacan.

The anti-epal movement is also gaining ground with today's politicians, as proven by two dynasty-enders. Remember the free food truck doing rounds in Manila in 2019? The truck was originally emblazoned with stickers sporting the "Kusina ni Isko" branding—which Manila Mayor Isko Moreno had removed after folks online called his attention. It was promptly renamed to "Kusina ng Batang Maynila."

So what's wrong with attaching their names to projects? The thing is, no matter how small or inane it may seem, it reinforces the idea that we owe something to these politicians who are, more accurately, public servants using taxpayer money to provide us with basic services.

All things from relief goods to a new highway, everything on the spectrum of government projects, are the bare minimum we should receive from the people we voted into office. As Sotto pointed out, it is all about "utang na loob," one of the deepest mentalities we Pinoys have—and should never be used as leverage by our leaders.

Adventurer Savvy Seasoned Government City Life Staying In Explainer Infrastructure
Your Guide to Thriving in This Strange New World
Staying
In? What to watch, what to eat, and where to shop from home
OR
Heading
Out? What you need to know to stay safe when heading out