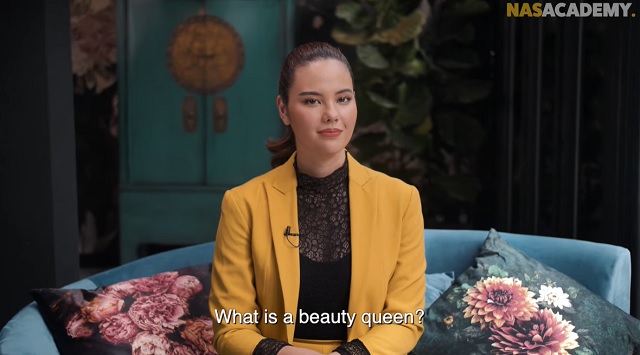 This queen's got advice on dealing with criticism and rejection with poise.

(SPOT.ph) Time to get #Learnt (as the kids are saying today, we think). Several Filipino figures, masters in their own fields, will be teaching a range of different courses and sharing their expertise online, and anyone can sign up. You've probably seen some form of content from Nas Daily on your feeds—now the popular studio is putting together several Pinoys and their respective masterclasses through Nas Academy. Catriona Gray led the pack (time-wise) with her academy course "How to Be A Queen" on July 31. Also dropping their own courses are Michael Cinco, Jessica Soho, and more.

When news about the courses first dropped, mambabatok Whang Od was promoted as one of the masters teaching the classes—until her granddaughter Gracia Palicas denied her participation through Facebook posts on August 4, said Reportr. "My grandmother did not sign any contract with @NasDaily to do any academy. Some people are taking advantage of our culture. PLEASE HELP US STOP this disrespect to the legacy of Apo Whang Od and the Butbot Tribe," she wrote.

According to Palicas, Whang Od did not understand what translators were saying when they approached her. "Apo Whang Od is not aware of your contract," she wrote, tagging the Nas Daily Facebook page. Palicas' two posts telling their side of the story have been deleted as of writing. Meanwhile, Whang Od's supposed course has also been removed from the Nas Academy site catalogue as of August 4.

Nas Daily also has a video featuring the famed mambabatok in her town of Buscalan posted in July. The official description on YouTube states that "we convinced Whang Od to become a teacher."

Check out the Filipino figures listed in the Nas Academy:

The course from 2018 Miss Universe titleholder Catriona Gray costs P1,900. The Miss U titleholder will teach how to not think life sucks—or at least, look like you don't think it does—with lessons on four main topics: self-confidence, dealing with anxiety and self-doubt, preparing for big presentations, and handling criticism and rejection with poise (we can think of a few government officials who need that last bit).

A peek at the site shows what each Pinoy figure's courses will be on. Check them out below:

Nas Daily started out with one-minute videos online, which were released daily by Palestinian-Israeli vlogger Nuseir Yassin. They now have a massive online presence with 40 million followers across their social media accounts. Yassin's connection with the Philippines—aside from their many videos on the country—goes pretty deep; he partnered with the Department of Tourism in 2019.

Adventurer Savvy Seasoned Whang Od Michael Cinco Nas Daily Catriona Gray Staying In
Your Guide to Thriving in This Strange New World
Staying
In? What to watch, what to eat, and where to shop from home
OR
Heading
Out? What you need to know to stay safe when heading out