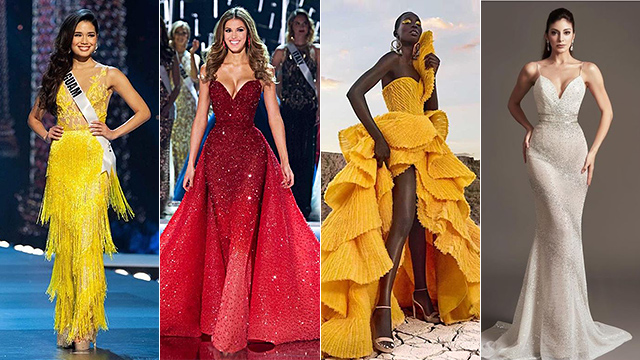 (SPOT.ph) The 2015 win of Pia Wurtzbach as Miss Universe in that now-unforgettable royal-blue dress was impressive for more reasons than one. It wasn’t the norm for our candidates to wear dresses designed by Pinoys back then and Wurtzbach reportedly had to drop major balls to exercise her right to wear the Albert Andrada creation—and that move clearly paid off.

Since then, Filipino designers have been a big part of the huge pageant, and it’s not just our candidates who have donned their designs! We round up a couple of the best times a Miss Universe candidate from another country absolutely slayed in a Filipino creation.

These 10 pieces by Filipino designers in Miss Universe are proof that Pinoys really do slay the pageant scene:

Iris Mittenaere at the 2017 Miss Universe

When French model Iris Mittenaere took her final walk as Miss Universe at the 2017 edition, she just so happened to be wearing a stunning ombre creation by Michael Cinco. It featured a mermaid cut with a full skirt and even a detachable train for extra oomph. And if you’re wondering how Cinco got it to shine, well, note that the gown is encrusted in Swarovski crystals. This absolute stunner reportedly took around a month to create.

Anna Burdzy at the 2017 Miss Universe

When the Miss Universe company visited the Philippines in 2017 as part of their tour, Rajo Laurel was tasked with designing something for then-reigning Miss U Demi Leigh Nel-Peters to wear at a charity ball: a task he was given one day to do! Still, Laurel and team managed to come up with a dreamy white column piece with classic detailing. Definitely befitting a queen.

Miss Universe 2016 Iris Mittanaere donned another stunning Filipino piece at the 2017 charity ball, which she attended with the 2015 queen Pia Wurtzbach (who wore a Francis Libiran piece) and then-reigning queen Nel-Peters. The French model graced the event in a fairy tale-esque ballgown that we could only dream of wearing, as designed by Albert Andrada. Just look at the silver detailing! Andrada was also responsible for Wurtzbach’s unforgettable royal blue gown in which she won the 2015 crown.

You can never go wrong with a classy white gown, and Miss Ecuador proved just that with a custom Mark Bumgarner piece at the 2018 Miss Universe. The mermaid cut, thin straps, and that incredible cinch—complete with silver embellishments to emphasize her figure—worked incredibly well on the statuesque Virginia Limongi Silva. You’d never think the brains behind this piece was first a professional race-car driver before shifting to fashion design!

The 2018 Miss Universe was a big year for Pinoys, and not just because of Catriona Gray’s epic win. Around 12 candidates from different countries wore pieces by Filipino designers. One clear standout was this joyous canary yellow frock by Paolo Blanco, as worn by Guam’s Athena Su McNinch during the preliminaries. We can imagine it was hard to resist dancing while strutting in this gown.

Part of the stunning roster of Filipino-designed gowns at the 2018 edition is this unique one by Jian Lasala. As the designer shared on Instagram, they were going through a particularly rough patch when creating this piece—but the hard work certainly paid off! We love the unique material and that subtly sexy design. And when matched with the confidence of Kenya’s Wabaiya Kariuki, it’s definitely a combo that’s hard to beat.

Benj Leguiab IV has created several unforgettable pieces for Filipino competitors, including the “Philippine Map” gown of Alyssa Muhlach Alvarez which featured our islands cut into the back’s details. It’s no surprise that folks from different countries have taken notice of Leguiab’s designs. Just take a look at the intricate piece designed for Sierra Leone’s Esther Bangura! The dress was almost fully handmade and is embellished with Japanese beads and Swarovski crystals.

Yuumi Kato at the 2019 Miss Universe

In a sea of bright, glittering dresses, Japan’s Yuumi Kato worked the runway in the sweetest blush gown. The understated piece ironically made sure that she was the one who stood out. And as for the genius behind the gown? Well, it looks like Joel Escober has a deep connection with the Japanese pageant world. After all, Escober also designed a full collection of evening wear for all the finalists to wear at the 2019 Miss Universe Japan.

Nova Stevens at the 2020 Miss Universe

It was confirmed that Michael Cinco would be designing Miss Universe gowns for Canada candidate Nova Stevens just days after she posted on IG about Filipino fans dropping incredibly hurtful and racist comments on her account. It’s clear that there’s no bad blood here though, as she dropped some shots of herself in two couture Cinco creations! Stevens also posted a short clip showing the Dubai-based designer planning her Miss Universe night 'fits. We can’t wait to see the complete look when the pageant happens on May 17.

Adventurer Savvy Seasoned Miss Universe Filipino Designers Francis Libiran Michael Cinco Albert Andrada Joel Escober Benj Leguiab Jian Lasala Paolo Blanco Mark Bumgarner Gowns Fashion Staying In
Your Guide to Thriving in This Strange New World
Staying
In? What to watch, what to eat, and where to shop from home
OR
Heading
Out? What you need to know to stay safe when heading out