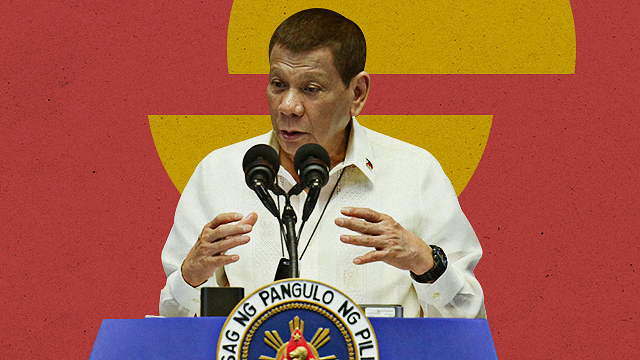 Drinking game: Take a shot for every mention of "war on drugs."

Also read: The #SONA 2021, As Told Through the Best Twitter Reactions

Vice President Leni Robredo was not initially invited to attend, but was later sent another invitation to be at the SONA in person. However, her second dose of AstraZeneca through Quezon City's vaccination program is not until August 11, prohibiting her from appearing at the venue for security reasons.

As a prelude to the speech, the Philippine Philharmonic Orchestra performed through livestreaming from the Cultural Center of the Philippines' main ramp with "Dust in the Wind" and "What a Wonderful World" as part of their reportoire. Duterte reportedly rehearsed his speech four times, and it was expected by the Palace that it would last for only an hour. Officially, SONA 2021 ran for more than three hours; and the president's speech started a little after 4 p.m.

"By far, this is the most beautiful SONA crowd that ever happened here. So many beautiful faces."

In true Duterte fashion, the president made a remark about the audience's appearance—even if everyone wore masks.

"When I ran for the presidency, I just made fundamental processes and strangely, you can count them by the fingers of your hands."

As expected, the president cited his accomplishments in the last five years. These are free education, universal health care, fight against illegal drugs, criminality, and corruption.

"My purpose was pure and unpolluted."

Duterte said that his purpose for presidency was "pure and polluted." However, in 2015, he said that he plans to fight crime through a bloody strategy. "Ang plano ko, magiging madugo 'yan," he was quoted during the 17th founding anniversary of Volunteers Against Crime and Corruption at Camp Aguinaldo on July 3, 2015. "Kung drug addict ka o pusher, I will hang you. If authority pa ang involved, alambre gagamitin ko dyan," he added back then.

The International Criminal Court is also set to investigate the administration's so-called "war on drugs," after the Supreme Court affirmed that the administration is obliged to acnowledge the Rome Statute provision.

Duterte is known for his sexist remarks; and even in a prepared SONA, he managed to squeeze out a locker-room joke. He said that he had to take a pause since he has gone ad lib and the teleprompter can't keep up with "the gray matter between [his] ears." Then went on to thank the women operating the teleprompters.

"If you see them walking around, kindly shoot them dead."

Duterte asked the Congress and Senator Bato dela Rosa to look into the issue on the illegal importation of AK-47 through rebels and the communist party as he claimed. The chief executive ordered, "Maraming sundalong namatay dahil sa armas na pinasok nila dito sa Pilipinas. My orders today, if you see them [communists] walking around, kindly shoot them dead. I will be happy. Anyway, you will be only charged in the International Criminal Court (ICC) with me."

"I did not know I was fighting my own government."

As in previous SONAs and his speeches, Duterte again mentioned his "war on drugs," which, according to him, "is being participated by nine generals of the PNP." "When first said I would fight drugs in six months, I thought it was like in Davao—you can either coerce, intimidate, or bribe them."

"Those who destroy my country, I will kill you."

"We have taken away the misery of public commuting."

Duterte hailed the improvement of the MRT-3 and other infrastructure projects. Public transportation, however, remained difficult for people especially after the government implemented restrictions for public utility vehichles amid the pandemic.

"You cannot stop corruption, unless you overturn government completely."

Duterte suggested to "declare Martial Law and fire everybody" to change the system. The president's campaign in 2016 was grounded on the promise to fight corruption, crime, and illegal drugs.

The president said that "there is no way of telling when this virus would disappear. We can only pray to God to look in our direction and decide on what will happen to the planet he created." He also joked about being infected by the virus since he can't pronounce the words to his speech properly.

State Of The Nation Address Sona Duterte News Hard News Adventurer Savvy Seasoned
Your Guide to Thriving in This Strange New World
Staying
In? What to watch, what to eat, and where to shop from home
OR
Heading
Out? What you need to know to stay safe when heading out