Books on VP Leni Robredo Desk and Where to Get Copies
Loading
Already a member? Log in
No account yet? Create Account
Spot.ph is your one-stop urban lifestyle guide to the best of Manila. 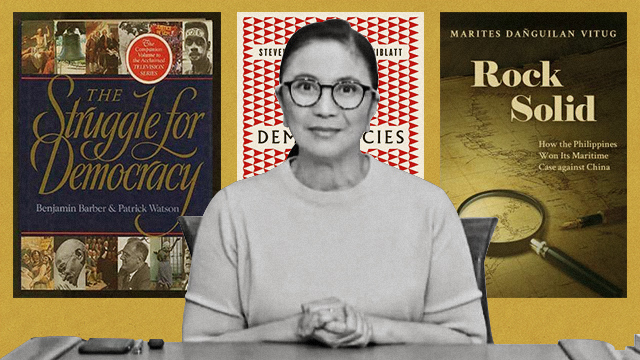 Two more books were seen in her September 28 speech.

(SPOT.ph) Vice President Leni Robredo has been addressing the Filipino people through her Facebook page since the pandemic started. There was a COVID-19 situationer in March, where she explained the importance of consulting with the experts. In July, she presented an eight-point proposal to solve the crisis as well as the things that her office is already doing. Aside from her well-articulated message and specific action plans, her last two recorded speeches—one in August 24 and another on September 28—are also generating a lot of buzz because of the books seen on her desk. Her reads revolve on democracy, government, constitutional law, and more.

Here are the titles we spotted on VP Leni Robredo's desk, in case you want to check them out:

How Democracies Die: What History Tells Us about the Future by Steven Levitsky and Daniel Ziblatt (U.S. $10.99, roughly P533)

Democracy gives power to a society, but sometimes leaders wants to quash this power. In How Democracies Die: What History Tells Us about the Future, authors Steven Levitsky and Daniel Ziblatt cite examples of the times that democracy broke down in Europe and Latin America. By knowing the slow and painful death of democracy, it is with hope that we would learn from history on how we can pull the brakes on impending authoritarianism.

Rock Solid: How the Philippines Won Its Maritime Case Against China (2018) by Marites Virug (P545)

Rock Solid outlines how the territorial dispute in the West Philippine Sea started—from China's illegal structures on Mischief Reef and the foreign country’s continuous harassment of Filipino fishermen—to how the Philippines lawyered up with the United Nations Convention on the Law of the Sea on its side.  It also documents the full account of the Permanent Court of Arbitration.

Thinking Beyond Politics: A Strategic Agenda for the Next President (2015) by Victor Andres C. Manhit

Published by Albert Del Rosario Institute for Strategic and International Studies in 2015, Thinking Beyond Politics: A Strategic Agenda for the Next President by Victor Andres C. Manhit is available as a free download through the Academia. It compiles eight different political essays in four topics: foreign policy and national security agenda, economic agenda, governance reform, and environmental agenda. And it looks at the perennial problems following the administration of Benigno Aquino III and into the governance of then-president-elect Rodrigo Duterte.

The Intangibles that Make a Nation Great: Selected Speeches, Lectures, and Writings (2003) by Jovito R. Salonga

Jovito R. Salonga served as a member of the Congress from 1961 to 1965, then a senator from 1965 to 1972 and from 1987 to 1992. He was one of the most outspoken opponents of Ferdinand Marcos' regime and defended political prisoners during the time of the dictator. The Intangibles That Make a Nation Great compiles Salonga's most notable speeches and writings.

Available in local and foreign libraries.

Constitutional Law by Isagani A. Cruz and Carlo L. Cruz is often used as a reference for Constitutional Law subject in law school. It provides an in-depth study on the bill of rights, citizenship and suffrage, and social justice and human rights based on the Philippine Constitution.

First published in 1989 with a new edition in 2001, The Struggle for Democracy explores the origin of democracy and how it empowers ordinary citizens. The revised copy includes some of the most historic events as societies struggled for democracy, such as the destruction of Berlin Wall and student demonstrations in Tiananmen Square.