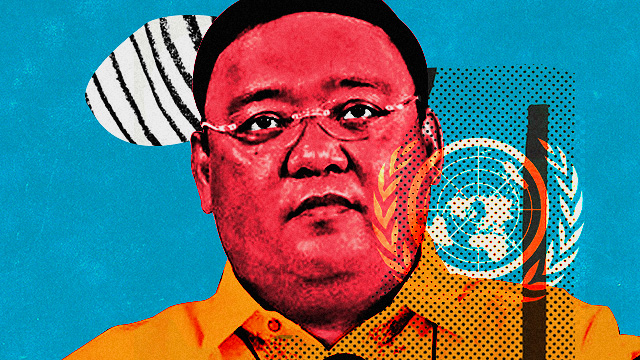 They said that the spokesperson "lacks moral and ethical integrity."

(SPOT.ph) Every five years, the United Nations General Assembly elects 34 individuals from different nations to hold a position in the International Law Commission. They're responsible for helping develop and implement international law; and are expected to be "persons of recognized competence in international law." With the term of office expected to expire at the end of 2022, a long list of candidates nominated by member governments were submitted to the Secretary General on June 1. And one of them is Presidential Spokesperson Harry Roque, who was nominated by the Philippine government.

The public official confirmed this himself on June 17, when he thanked President Rodrigo Duterte and Foreign Affairs Secretary Teodoro Locsin Jr. for the nomination. Various civil society organizations are protesting this nomination, citing that "Roque lacks the moral and ethical integrity to work in such a prestigious global mechanism and demonstrates questionable qualifications and expertise as an international legal expert."

A letter addressed to Secretary-General of the International Law Commission details the three reasons for the objection: "Mr. Roque works against the interests of international justice," "Mr. Roque has also received the ire of Philippine citizens with his callous and insensitive remarks, circumventing regulations, and questionable actions in his defense of government policies and pronouncements," and "Mr. Roque does not harbor the principles befitting a member of the ILC."

It cited specific incidents, which can be deemed unbecoming of an international legal expert. His public speeches and opinions, for example, undermined the importance of International Criminal Court. "We are confident because we already said that we don't recognize International Criminal Court jurisdiction," he said in a press briefing on December 15, 2020. This came after they expressed their intent to investigate the Duterte administration's so-called "war on drugs." Roque was also quoted in an interview with ANC in June 2021, when he said that those killed were “collateral damage."

The letter also provided situations when Roque's stance on national issues was questionable. For example, he warned Filipinos against voting for Duterte before the 2016 elections, calling the former Davao mayor a "self-professed murderer. Roque later became the presidential spokesperson who has "no personal opinions." He also rationalizes misogynistic jokes often made by the president.

The petition "Call on ILC to Reject Harry Roque" can be found on iDEFEND's website, a grassroots movement with the mission to defend the rights and uphold the dignity of all Filipinos. As of writing, 64 organizations have expressed their support for the petition, including Alyansa ng Kabataang Mindanao Para sa Kapayapaan, Amianan Pride Council, DAKILA (Philippine Collective for Modern Heroism), Coalition Against Trafficking in Women-Asia Pacific, and We the Future PH. More than 1,700 individuals have also signed the petition with signatories coming from different parts of the Philippines.

News Hard News Harry Roque United Nations International Criminal Court Adventurer Savvy Seasoned
Your Guide to Thriving in This Strange New World
Staying
In? What to watch, what to eat, and where to shop from home
OR
Heading
Out? What you need to know to stay safe when heading out