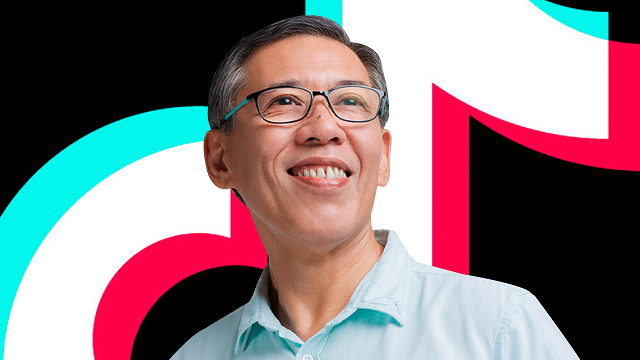 We talk to the human rights lawyer about why he started his own account.

(SPOT.ph) Chel Diokno is one of the rare political figures that have tried to get on today's social media platforms—and succeeded in not making cringe content. The human rights' lawyer has around 215,000 followers and 1.7 million likes as of writing! Not bad at all for a lolo, or "woke lolo" as he has been dubbed by Twitter, on a massive platform practically ruled by the Gen Z.

Also read: Got Vaccine Questions? This TikToker Has the Medical Know-How Without All the Preachiness

Aside from hilariously on-trend clips on serious matters (take the ngipin clip above, his most viral one so far with more than two million views), Diokno also shares tips on legal problems you might encounter, bits from his life as a lawyer and educator, and even a tutorial on how to make cauliflower rice—set to that Ratatouille track, of course.

Doing It for the Young Ones

"The Internet is a natural opportunity for candidates like me," says Diokno in a chat with Summit Media editors. Ad placements or even air time on television and radio costs money, a lot of it, which is where the more or less free social media platforms become useful. As Diokno explains, the TikTok account was borne "partly out of the lack of resources."

Plus, Diokno and his team had more than just the affordability as a reason to get on Tiktok. "We are always on the lookout for ways to get the message out, especially to our youth," he says. "We're getting more and more young people as registered voters. In 2022, our estimate [is that] there will be around 40 million Filipinos between the age of 18 to 29 who can vote, not necessarily meaning they are registered, they are qualified to vote." So when they looked at TikTok and its massive crowd of young folks, they naturally asked "Why not?" joked Diokno.

Yup, Chel Diokno Knows How to Operate a Phone Camera

So here's what you're probably asking: "Does Chel Diokno make his own TikToks?" Well, it turns out he does the filming himself mostly—"But I don't have the technological capacity to edit and do all that," he says, cheekily clarifying the first statement immediately. By "all that" we're guessing the cuts and music!

Yeah, does your lolo know this "Shake that A$$" trend? Well, to be fair, he does have help from his TikTok savvy team—and even filmmaker Pepe Diokno, who is yup, his son! "I have a team who helps me...and you know my eldest son is Pepe, so I guess it is natural that he would be there [to] give me some help when it comes to things like that."

And as for content, they talk as a team about what to tackle next (or maybe even what hilarious clip to do next). "If there's some raging issue that's happening at that particular time and we want to make a statement," they discuss how best to address it, whether that be through a fun TikTok clip or a different platform.

Diokno's first TikTok was on June 14, making it just a few months old. And so far, the fun clips are proof that the "woke lolo" is living up to his moniker!

Adventurer Savvy Seasoned Chel Diokno Tiktok Pepe Diokno Staying In Hard News Summit Sandwich Sessions
Your Guide to Thriving in This Strange New World
Staying
In? What to watch, what to eat, and where to shop from home
OR
Heading
Out? What you need to know to stay safe when heading out