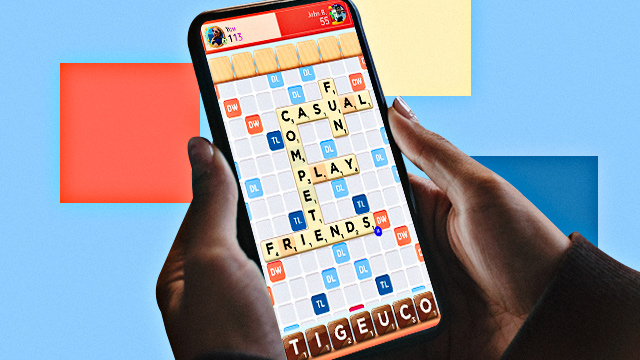 We hate missing Scrabble tiles and Monopoly houses, too.

(SPOT.ph) As much as we love a fun, chill day playing board games with our friends, there’s nothing as annoying as looking for that teeny-tiny Monopoly house under the couch. Don’t even get us started on counting the Scrabble tiles just to make sure they’re complete or arranging the UNO cards face down to satisfy our Virgo selves. If you love board games but hate the mess, might as well play with your friends through nifty gaming apps. Plus, you don’t even have to invite them over and deal with all the trouble of welcoming guests in your home.

Also read:
10 Mobile Escape Games to Play Until We Can Actually Go Out

Here are 10 classic board games that you can play on your phone:

Playing Scrabble is pretty straightforward: spell out a high-scoring word with the tiles on your rack to win a round. But Scrabble GO by Scopely lets you try four other modes: Duels, a five-round head-to-head timed game; Word Drop, where tiles are switched out every round; Tumbler, which is similar to anagram; and Rush, which is a solo-player mode. There's also a chat box for when you want to talk virtually with the other players while playing a game or two of this classic that’s been around since 1938.

Anyone else having a hard time holding all UNO cards when you've got a bunch in your hands? Mattel's card game is available on mobile so you can play with ease. You can also come up with your own rules like playing with a buddy through a two-versus-two mode; enable "Wild Punch," which you can use to send back a Wild card to the person who played it; or allow "Stack" mode and let an unlucky player pile cards into their hands.

Monopoly's mobile version lets you play virtually with friends and family through its multiplayer video chat. It has graphics and animations to level up that Hasbro classic experience of rolling the dice, buying a lot, putting up a property for sale, or just paying a parking ticket. No more missing house pieces!

Yahtzee is a classic dice game that started out under the brand Yatzie in the 1940s. It wasn't until 1956 that the current name came into play. The objective is pretty simple: score as many points as you can by rolling five dice to make specified combinations that come with varying values. The mobile version is pretty much the same, but with the additional customization of your dice and game board to complete the dice-rolling experience.

Clue or Cluedo is a popular mystery game that's been around since 1949. It has since been adapted into a film, a television game show, a book series, and other game spinoffs. The mobile game version has the same objective: determine who the murderer is, where the crime took place, and which weapon was used. You also get a virtual Clue Sheet where you can take notes and make logical decisions to solve the case.

The Game of Life

The Game of Life was America's first popular parlor game created in 1860. As the title implies, it simulates a person's life journey—from childhood to old age; except the life-changing decisions along the way are made by spinning a wheel or drawing a card. (If only it were that simple.) The mobile version gives you a 3D rendering of the familiar board game.

Fleet Battle is based on Battleship, which was originally a pencil-and-paper game from World War I. It was later turned into a plastic board game version with pegs was released in 1967. The game is all about strategy: the paper or board has marked locations of your battleships, which are all concealed from the other player. The objective is to destroy the other player's fleet.

This modern take on the classic board game from Hasbro is just like the OG minus the mess of the blocks of letters. You can go head-to-head virtually for a two-minute game, improve your word smarts in solo mode, or compete in daily or weekly challenges against other online players.

Snakes and Ladders, which is actually an ancient Indian board game called Moksha Patam, is made more fun with this mobile version by mobirix. It has cool graphics, a multiplayer mode, and features interactive sound effects and music.  The game also has a survival mode, which lets you play again and again to beat an IA opponent.

First created in 1995, Catan is a multiplayer board game where you pretend to be the first inhabitants of a piece of land that you have to develop into a lucrative settlement. The free mobile version called Catan Universe follows the narrative that you’ve just arrived on a virgin island after a long journey. You’re up against two other players, who also have the task of building roads and bridges, trading resources, and everything it takes to be the “Lord of Catan.”