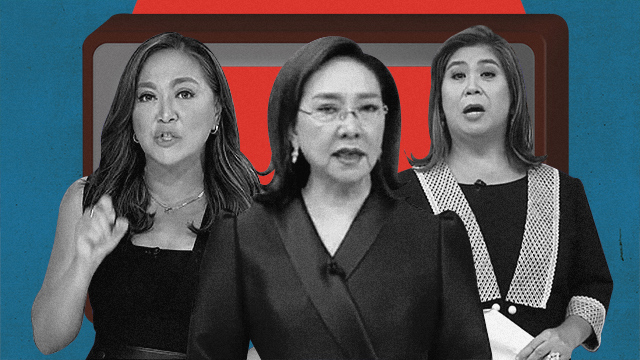 The Spiciest Moments From Broadcasters During Election-Day Coverage

These power moments were absolute moods.

(SPOT.ph) May 9 has come and gone—and the repercussions of this day will be felt for a very, very, long time. Voting day did not pass by smoothly, to say the least. You probably went out and lived it, but a peek at news coverage from the day the Filipino people voted for the 17th President of the Philippines shows just how much it got. You saw it: broken VCMs, shootings at precincts, the unnofficial tally late into the night—and at the helm of all this information stood our news channels. Their marathon coverage of what was going on in real-time had the public on their toes, and as things got messier, well, it made for some truly historical broadcast moments.

Several veteran journalists became trending topics online during their reportage. And for good reason. They reflected the people's feelings on ground—in young-people speak, they were big moods. Just, absolute freakin' moods. We're sure you saw bits and pieces from Karen Davila, Mel Tiangco, Vicky Morales, and more as they asked all the right questions and made very valid points. While we'd rather not live through that day (unchanged) again, we wouldn't mind seeing these queens and their power moments once more—and Twitter definitely agrees.

Why were Mel Tiangco, Karen Davila, Vicky Morales and more trending on Twitter on May 9?

Mel Tiangco was fiery all throughout—especially when it came to the COMELEC's response to all the problems at precincts. "There has got to be a very good reason," she said at one point, pertaining to COMELEC and why several VCMs weren't working.

Enriquez could be heard starting to say "at" before realizing he had cut off Tiangco, saying "Sorry, Mel." Unfaltering, he added his own spice to the moment by leaving us instead with "Kayong mga nanalo, tandaan ninyo, magbabantay kami. Ako po si Mike Enriquez.”

"The politics that we have seems to perpetuate poverty." This was the point Soho had to make while interviewing Professor Rowena Daroy-Morales from the UP College of Law. Soho first contextualized her question by saying "Kung titignan mo rin naman 'yong politika natin sa ating bansa hindi naman po nagbabago, marami pa ring mahirap."

Meanwhile, Vicky Morales interviewed Professor Ranjit Rye of the UP Political Science Department and had an observation to make. "Basically this election has rewritten the way elections are won in this country," she starts off.

In an interview with COMELEC Commissioner George Garcia on TV Patrol, Davila straight-up asked the question on everyone's minds: "Ano ba ang kakailanganin para ang COMELEC en banc ay mag-desisyon na i-extend; dalawang oras lang naman po ang hinihingi." This truly spicy moment must have hit hard with folks online as Davila was the queen of the trends that night—and with the way she followed up her question, we can see why.

Davila even followed through with more tweets via her personal account. The newscaster was adamant that COMELEC hold themselves accountable.