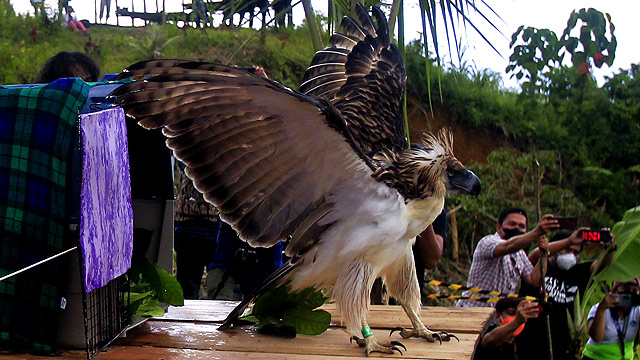 Rescued Philippine Eagle Is Released Back Into the Wild

It returns to its home in Mount Busa.

(SPOT.ph) The Philippine eagle (Pithecophaga jefferyi) is considered the largest and most powerful raptor in our forests. It has a wingspan of up to seven feet (read: a basketball player's height) and has powerful talons that can easily cut through the body of prey. Unfortunately, this rare and majestic is critically endangered due to deforestation and hunting. In fact, a three- or four-year-old male Philippine eagle with gunshot wounds was rescued in Mount Busa in Sarangani in 2021; and after 18 months of recovery, the raptor was finally released back to its forest home on Monday, June 13.

Also read: The SPOT.ph Guide to Sarangani: 10 Reasons to Visit the South

The Release of Sarangani's Philippine Eagle

The Philippine eagle, which was first named Salagbanog then later Sarangani Eagle, was found trapped among rattan vines near Salagbanog Falls on January 8, 2021 by a local farmer. It had a marble projectile lodged on its right shoulder and an airgun pellet at the base of its neck. Through the help of the Philippine Eagle Foundation, the eagle underwent surgery and rehabilitation, but that wasn't enough for this not to happen again.

"It takes a village, a community, to save an eagle; therefore we'll need so much more to save the species," the Philippine Eagle Foundation said in a Facebook post.

The Philippine eagle, also called the Monkey-Eating Eagle, is just two steps away from extinction, according to The IUCN Red List of Threatened Species. Their adult population is currently from 180 to 500, and they're still decreasing especially since their population is severely fragmented. The fact that there's a continuous decline in forest habitats doesn't help. Threats to their lives, according to IUCN, include logging, mining, and quarrying of our mountains, pollution, severe climate change, and hunting (both of the predator and their prey).

The release of Sarangani Eagle a day after Independence Day was made possible through the partnership between the Alsons Power Group and the Philippine Eagle Foundation (PEF). Alsons Power is providing material and personnel support to PEF for its training and public awareness campaigns for the protection of Mount Busa Key Biodiversity Area in Sarangani. It also provided funding and logistical support for the tracking of the Sarangani Eagle for the next three years through an electronic tracker.