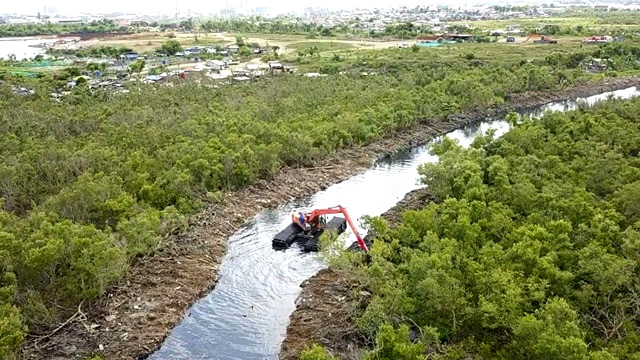 The local government started a cleanup drive to prevent flooding.

(SPOT.ph) As an archipelago, most—if not all—towns in the Philippines are surrounded by water. We have communities along our coasts, near riverbanks, or in the middle of a lake. And since people inhabit these places, garbage almost always ends up in the water—causing major floods. In an effort to prevent heavy flooding in villages along the Butuanon River in Mandaue City, the local government on June 20 led a river cleanup.

Up to 50 tons of garbage were collected during this clean-up drive that covered one kilometer starting from the river's mouth. Aside from plastic bags, logs and silts were also removed from the waterway.

Butuanon River traverses Mandaue City, Cebu City, and the municipality of Consolacion. Due to pollution, it was declared dead as early as 1992. This means that flora and fauna cannot survive in the Butuanon River, which is polluted with industrial waste and garbage. Thousands of informal settlers, many of whom have no proper sewage nor available garbage disposal, live along the riverbanks. Tests conducted in February 2020 showed that the river was contaminated with the contagious poliovirus. Both Mandaue City and Cebu City have identified "danger zones" near the Butuanon River and started relocating families.

In 2021, a trail park with a viewing deck opened in Barangay Ibabao-Estancia along the river. The Department of Environment and Natural Resources's "Bayanihan sa Butuanon" campaign has been ongoing since 2018 in an effort to revive the Butuanon River.