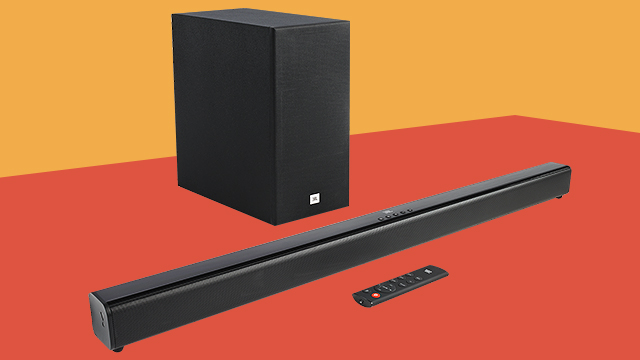 There's one for every budget.

(SPOT.ph) Setting up a home theater sound system can be intimidating, complex, and costly especially if you’re just starting out. Aside from having to decide on components such as amps, speakers, subwoofers, and even wiring, building such a sound system can be overkill for a lot of people who just want an upgrade from the basic sound coming from built-in TV speakers.

Soundbars offer an easier upgrade path to high-quality sound without fussing around with a lot more complicated multi-speaker sound systems. Aesthetically, soundbars also complement the sleek design of most flat screen TVs. Soundbars have been available since the late '90s but thanks to improvements in technology, they have become more affordable while packing the latest advancements in speaker design.

Like any audio equipment, the price of soundbars can vary depending on the features. The basic model can start at around P4,499 to P79,999 and upwards. The good thing to remember is, even entry-level soundbars sound quite good compared to integrated TV speakers.

Basic soundbars can come as a single-unit device. These single units can come with either stereo or surround sound capabilities, depending on the model. They can be placed in front of the TV or mounted on the wall. Soundbars can have anywhere from two, four or even more speakers integrated in a single enclosure. Basic models like the LG SK1 have two-channel sound with 40W of power delivering stereo sound. Another entry-level example is the Sony HT-S100F.

When it comes to soundbars, buyers might encounter numbers such as 2.0, 2.1, 5.1 etc. The important thing to remember that the first number is the speaker channels (also called drivers) the soundbar has. The second number means the presence of a subwoofer (or low frequency) channel with .1 meaning it’s available and . 0 denoting that there is none. A subwoofer driver can either come as a separate box-shaped unit, and is connected to the soundbar unit either through a wired or wireless connection like the JBL Cinema SB160 soundbar. Another example of this is the Samsung HW-T450 soundbar.

Note that some soundbars can also have the subwoofer driver integrated in the soundbar enclosure itself. Sometimes there’s a third number i.e. 5.1.2, 2 denotes the number of upward firing drivers for delivering overhead surround sound.

Soundbars are connected to TVs and other audio sources through several connections similar to other home theatre speaker systems. These available connections are usually Bluetooth, mini-stereo jack in, optical audio, coax, and HDMI. The multiple connections also allow you to use the soundbar as a speaker system for other devices such as your smartphone, computer, or game console.

More advanced soundbar models can also deliver surround sound via DTS, Dolby Digital, and Dolby Atmos support such as the HW-Q900T/XP soundbar from Samsung. What is also important to remember is the soundbar can only decode true multichannel sound if it is available from the source and the proper connection is made (usually optical SPDIF, HDMI, or coax input) from the source. For example, Netflix supports Dolby Atmos and 5.1 surround sound for some titles, which display the 5.1 or Dolby Digital Plus 5.1 icon on the movie’s description. A soundbar can also offer virtualized surround sound, it can upmix the sound into virtual multi-channel sound from a stereo source. Since the surround sound is just simulated, it may not be as immersive and distinct as real surround but it still offers enhanced audio from just listening in standard stereo mode.

Most soundbars come with a separate remote control but depending on the model, some units can have TV remote integration when connected through HDMI with HDMI ARC or eARC connectivity. This is usually implemented smoothly with similar TV and soundbar brand combinations such as the Sony HT-X900F, which can wirelesly connect with a Bravia television. More advanced soundbars can also double as smart speakers and may have integration with services such as Spotify, Amazon’s Alexa, and Google Assistant such as the LG SN9YG soundbar.

Whichever soundbar you end up bringing home, there are plenty of choices out there that would suit your preference and your budget.

Adventurer Savvy Laptops Seasoned Gadgets Staying In Heading Out Con-00263 Gaming Msi Tech
Your Guide to Thriving in This Strange New World
Staying
In? What to watch, what to eat, and where to shop from home
OR
Heading
Out? What you need to know to stay safe when heading out