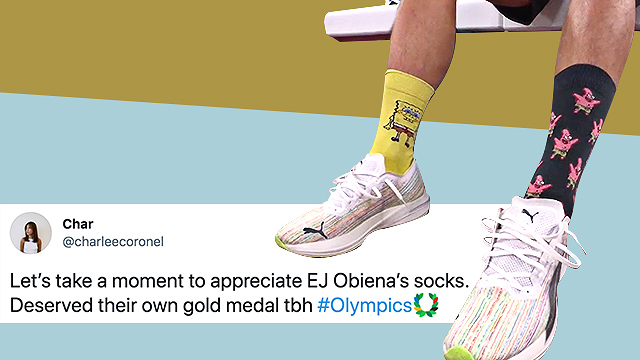 The Internet Is Obsessed With EJ Obiena's Mismatched Spongebob Socks

Here's where he got them.

(SPOT.ph) On Tuesday, August 3, the country watched as Filipino pole vaulter EJ Obiena competed at the 2020 Summer Olympic Games in Tokyo against 13 other atheletes. Though he didn’t clinch the podium finish during the finals round, the athlete received nothing but praise and admiration from his fellow countrymen, especially after he valiantly fought for his right to fair play. Aside from his incredible athletic performance and willingness to fight for fair competition, the pole vauter also made headlines because of his adorable mismatched Spongebob Squarepants-themed socks.

Many noticed that Obiena was wearing two different sock designs on each foot—one bright yellow sock featuring Spongebob somewhere around the lower shin and one navy sock with Patrick Star printed all over. Popular fashion brand H&M was quick to point out that both styles were from their stores.

We found the pairs on H&M Philippines' website. Just to be clear, each design is sold separately—not in a purposely mismatched set—which means Obiena actively decided to make the fashion statement for his Olympic run. We love a man who takes sartorial risks! Unforunately, both pairs of socks (priced at P299 each) are currently out of stock in H&M's local outposts and web store. Looks like your dreams of copping Obiena’s look will have to wait for now.

Some Internet users pointed out that the Obiena's socks may have been a reference to a season 2 episode of Spongebob Squarepants first aired in September 2001 entitled "The Fry Cook Games" wherein Spongebob and Patrick comepte in a series of sporting events and yes, pole vaulting included! Could Obiena have been making a cheeky pop culture referece that every 2000s kid would know right away?

Others simply praised his quirky style and even encouraged him to rock the same ensemble in the 2024 Paris Olympics.

It turns out the funky socks look is an Obiena signature. He was also seen wearing an avocado-printed pair at the Summer Olympic Games just a few days prior.

Now, if you excuse us, we're going to go put on a pair of quirky socks that purposely don't match. Crossing our fingers that the style helps us channel EJ Obiena's athletic superpowers.

Shopping Staying In Tweets Ej Obiena Tokyo2020 Olympics Savvy Adventurer Seasoned Topspot Shopping H&m Sock
Your Guide to Thriving in This Strange New World
Staying
In? What to watch, what to eat, and where to shop from home
OR
Heading
Out? What you need to know to stay safe when heading out