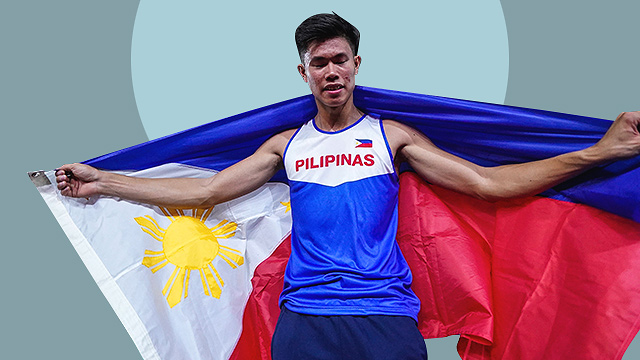 The Filipino athlete spoke up.

(SPOT.ph) The wins just keep coming in for the Philippines! As of Day 11 of the 2020 Summer Olympic Games in Tokyo, the country already has four medals: one gold from weightlifter Hidilyn Diaz, one silver from boxer Nesthy Petecio, and two more guaranteed medals (at least bronze) from boxers Carlo Paalam and Eumir Marcial. And while pole vaulter EJ Obiena didn't clinch the podium finish during the finals round against 13 other athletes, he impressed Filipinos with how he fought for his right to fair play.

Obiena cleared the bar at 5.55 meters on his first attempt; but it took him three tries to complete the 5.7-meter round. Then, during his third attempt to cross the bar at 5.8 meters height, he noticed that the bar was still moving during his turn, based on the discussion caught on camera. He went ahead and ran because the timer already started, but wasn't able to take off because he knew that there's something wrong with the set-up. That being his last chance to clear the round, he was in danger of getting eliminated from the competition.

Knowing that he's in the right, Obiena went up to the judges and the referee, and repeatedly said, "How can I jump if it's moving?" The officials confirmed what happened and he was given another chance after the heated discussion.

The Filipino athlete's decision to speak up was lauded by the people of the Internet. He may have failed to clear the 5.80-meter round (after emotions were running high), but he was successful in inspiring people to assert their rights.

Obiena, who is coached by his father, bemedaled pole vaulter Emerson Obiena—broke the Philippines' national record for pole vault in 2014. He would go on to surpass his own numbers several times in the same year. The Filipino athlete bagged the silver medal at the 2015 Southeast Asian Games in Singapore, the bronze medal at the 2017 Asian Athletics Championships in India, and three gold medals at the 2019 Asian Athletics Championships in Doha, 2019 Southeast Asian Games in the Philippines, and 2019 Summer Universiade in Naples.

UPDATE (August 4, 8:51 a.m.): In SPIN.ph's interview with Philippine Athletics Track and Field Association president Popoy Juico, the official explained what happened: "He pointed out the discrepancy in the timing device which indicate that when he started to run toward the cross bar, there were 56 left before the deadline for vaulting ftom the start of his run up but when he glanced back at the pit area after he aborted his third attempt, the clock said 15 seconds. EJ couldn’t believe that it took him about 41 seconds to finish his performance. The few seconds left didn’t allow him enough time to start again if he’s granted a fourth leap as a result of a successful protest."

UPDATE (August 4, 12:51 p.m.): In a report by CNN Philippines, Obiena himself explained that his timer should've been stopped because the bar was not stable due to strong wind. "I would say it's a bit of gray area. I was arguing that when I was about to jump, I had one minute to accomplish my vault. In one minute, there shouldn't be any disturbance or any way that I couldn't jump so that's what I was fighting for. I can't complete my vault if the bar is moving so I believe the time should've been paused," he said.

News Hard News Tokyo2020 Ej Obiena Adventurer Savvy Seasoned
Your Guide to Thriving in This Strange New World
Staying
In? What to watch, what to eat, and where to shop from home
OR
Heading
Out? What you need to know to stay safe when heading out