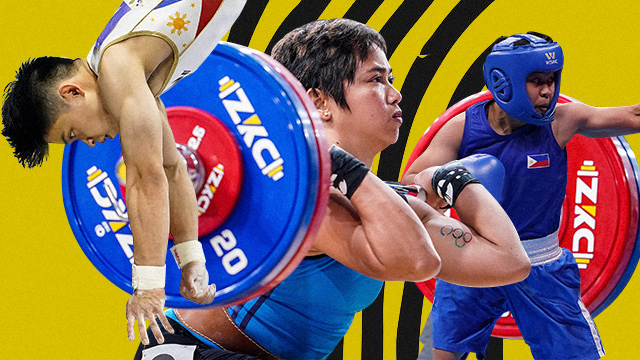 (SPOT.ph) In most heteronormative cultures, a lot of things are prescribed to specific genders. The color pink is associated with girls, playing with cars is associated with boys, and cooking well is expected among women. Young boys are often sent to taekwondo lessons, while young girls are told to take up ballet. These gender roles are a society's expectations on how people should behave based on their sex assigned at birth: male or female; and, more often than not, we fit people into these patterns and engage in gender stereotyping. But these things are changing, no matter how slowly, as proven by Filipino athletes.

Also read:
Two Filipina Athletes Take on the World Stage and the Result Is Meme-Worthy
Two Filipinas Gave Us Our First Multi-Medal Olympic Win in Nearly a Century

Gymnastics was included since the first Summer Olympics was established in Athens in 1896, but it was reserved for men. It was only in 1928 when women were allowed to compete at the world sporting event. Still, Artistic Gymnastics is regarded as a "modern sports for women" because of the combination of skill and grace—the latter often attributed as a female trait. There's also a disparity when women and men compete in their individual floor exercises: the former leap, flip, and tumble to recorded music, while the latter do their routine in complete silence.

Among Filipino athletes, Carlos Yulo proves that skill and grace are important for all gymnasts. He finished fourth in the final round of the men's vault event at the Ariake Gymnastics Centre on the afternoon of August 2, where he competed against 11 other gymnasts.

Boxing, on other hand, is often seen as a sport for men, who are believed to be tougher and can take the punches. In fact, male boxers were allowed to ditch the headgear starting in the Rio Olympics in 2016—but female boxers are still required to wear it. The decision, according to the International Boxing Association, is based on a study that showed that head injuries were more likely to happen among boxers wearing a headgear. Safety data didn't include those of female boxers, so the new rule wasn't applied to the women's boxing event.

With headgear or none, Filipina featherweight boxer Nesthy Petecio showed that women can flourish in the sport as well. And her family was supportive of this as her boxer father trained her and her younger siblings (a brother and a sister) to throw a punch as self-defense tool. She bagged a silver medal in her match against Japanese athlete Sena Irie on Tuesday, August 2.

Also read: Meet Nesthy Petecio, the Filipina Boxer Who's in the Running for Another Olympic Gold

Hidilyn Diaz—well, we all know what happened. The Filipina weightlifter bagged the Philippines' first-ever Olympic gold; and her doing it on the day when sexist "jokes" were slurred out on national television (yes, during the SONA) was extremely poetic. The phrase "lift like a girl" was thrown around as the Filipina broke gender stereotypes for what used to be an exclusive men's event since 1896 until the 2000 Summer Olympics in Australia. The 2020 Tokyo Olympics was Diaz's fourth appearance at the world sporting event, where she bagged the silver medal in the 2016 Summer Olympics in Rio de Janeiro.

Then there's Margielyn Didal, who made her Olympic debut on August 4 at the women's street skateboarding event. It was also the first time that skateboarding became part of the world sporting event, and immediately has separate categories for both men and women. But when skateboarding was born in the late 1950s, it was widely seen as a male-dominated sport. That all changed when more women took a board and skated their way to greatness.

Gender Equality in the Olympics

In terms of the bigger picture, the International Olympic Committee said that Tokyo 2020 is "the first gender-equal Olympic Games ever." For the first time, there's at least one female athlete and one male athlete in each of the teams; and all nations were required to have one male and one female representative to carry the flag during the opening ceremony. The organizers explained that women athletes account for nearly 49% of the 11,090 athletes. In Rio 2016, 45% were women; in 1894 Los Angeles, female athletes make up 23% of the population; in 1964 Tokyo, only 13.2% were women; and in the 1900 Olympics in Paris, only 2.2 % were women. The latter was also the first time that women were allowed to compete, four years since the first modern Summer Olympics was established in Athens.

The 2020 Olympics is also the first time that a transgender athlete is permitted to participate in the appropriate category. New Zealand weightlifter Laurel Hubbard competed in the 87-kilogram women's weightlifting event on August 2. This is after she became eligible based on International Olympic Committee's 2015 rule to allow trans women athlete to compete in the women's category if their testosterone levels are below a certain threshold.

Tokyo2020 Hidilyn Diaz Carlos Yulo Nesthy Petecio Adventurer Savvy Seasoned
Your Guide to Thriving in This Strange New World
Staying
In? What to watch, what to eat, and where to shop from home
OR
Heading
Out? What you need to know to stay safe when heading out