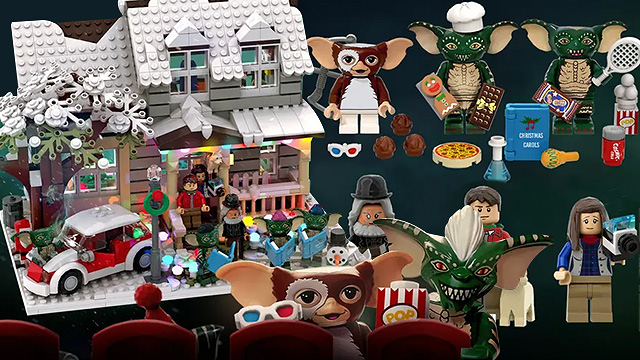 You Can Help Make This Filipino Artist's LEGO Design a Real Toy; Here's How

It was inspired by the 1984 film Gremlins.

(SPOT.ph) In November 2020, Danish toy company LEGO released the LEGO Ideas Sesame Street set, their first-ever model to feature the beloved children’s show from the 1960s. It was designed by Filipino artist, filmmaker, and LEGO enthusiast Ivan Guerrero. We here at SPOT.ph even got the chance to assemble the set and had a total blast! Now, Guerrero is back with a cool new creation for the world-famous toy brand inspired by another old-school pop culture-favorite: The LEGO Ideas Gremlins Set, which pays homage to the 1984 film of the same name. However, the set has not officially been built and distributed by LEGO—at least not yet, but you can totally help make it happen. Here's how.

Also read: LEGO's First Ever Sesame Street Set Was Designed by a Filipino and We Got to Build It

Filipino Artist Ivan Guerrero Designed a Gremlins LEGO Set; Here's How You Can Support Him

ICDYK, the Danish company runs a website called LEGO Ideas that allows users to submit ideas for new LEGO products. Those ideas have the potential to be turned into real LEGO sets that the company then sells all over the world with the designer getting a portion of the royalties. It is on this website that Guerrero's Gremlins set is currently featured.

"[My design] has a chance of becoming a real LEGO product someday if it gets 10,000 votes from supporters," says Guerrero in an e-mail to SPOT.ph. As of writing, it has over 5,700 votes from supporters. If you want to support the Filipino artist—or just get the chance to build a LEGO set inspired by a fun '80s movie—then you can vote on the site, too!

All you have to do is create an account on the LEGO Ideas website—or log in if you already have one—and hit "support" on Guerrero's model. Don't worry, it won't cost a thing to vote. And who knows? Maybe someday you'll get to build Guerrero's Gremlins set. Fingers crossed!

Much like Guerrero's Sesame Street set, which the artist created out of his love of the series, the Gremlins model is an ode to a truly nostalgic piece of media—'80s kids would know what we mean. The set is filled with references and little details you would recognize from the film including Billy Peltzer's snow-covered home and all its rooms, Randall Peltzer's workshop, and six minifigures representing Billy, Kate, Stripe, Mr. Wing, and two additional Gremlins.

"I consider the movie to be an '80s Christmas classic that most everyone has grown up watching," says Guerrero of Gremlins. In describing the film and his LEGO model inspired by it, he even referenced the popular Filipino expression "huwag kang mababasa, baka dumami ka." In case you didn't know, the joking remark is a direct nod to the Joe Dante-directed comedy-horror flick wherein the protagonist's pet Gizmo multiplied whenever he was exposed to water.

You can support Ivan Guerrero's Gremlins set on the LEGO Ideas website.